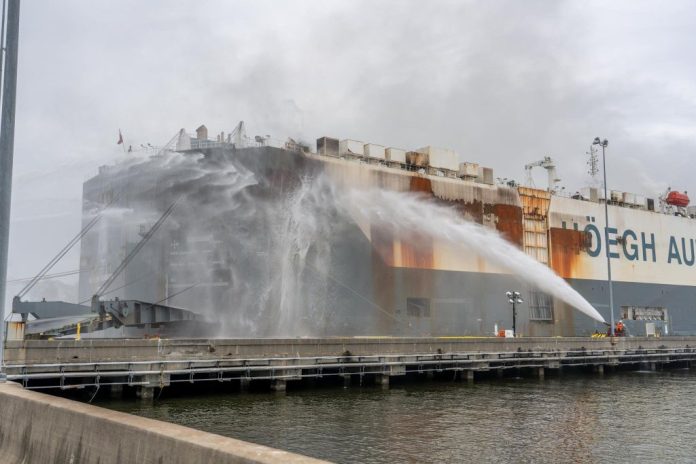 (www.MaritimeCyprus.com) Fire has always been a peril for shipping, but the advent of lithium-ion batteries has elevated the risk to the point that it now is the most expensive cause of loss for the industry.

Randall Lund, a senior marine risk consultant for AGCS, said the combination of ever-larger vessels and more hazardous cargo is leading to “astronomical” losses for insurers. Fire/explosion was the most expensive cause of loss for marine claims in 2021, accounting for 18% of US$9.2 billion in total losses, according to an analysis of 240,000 marine insurance claims over the past five years.

Lund said “without a doubt” the risk of fire at sea is going to keep growing.

“The increase in the volume of electric vehicles transiting across our oceans and the demand coming worldwide is continuing to increase,” he said. “Everybody is looking for the longest-lasting batteries. That just means there’s much more energy stored in that battery that is going to be released if something goes wrong.”

Damaged or defective lithium-ion batteries can experience a chemical reaction known as "thermal runaway" that generates heat and can ignite surrounding substances. Lund said batteries can be damaged while loading and quietly smolder without being noticed.

The vast size of modern container vessels and car carriers makes detection and firefighting more challenging. AGCS says container-carrying capacity has increased by around 1,500% since 1968 and has almost doubled over the past decade.

Lund said it can take several hours to get to the base of a fire on a container ship that has 20,000 containers on board, stacked ten high.

Fires in electric vehicles with lithium-ion batteries burn more ferociously, are difficult to extinguish and can spontaneously reignite hours or even days after they have been put out, the bulletin says.

Car carriers that are loaded and unloaded by rolling vehicles on and off them present unique safety issues that lead to “disproportionately high losses,” according to the bulletin. Lund said the batteries of electric cars are almost always carried on the bottom of the vehicles, which can strike any protrusions coming out of the vessel.

Often, fires on vessels lead to total loss. In 2021, fire was the cause of eight of 54 total losses reported, second only to foundering, with 12 losses, as the most frequent cause.

High-profile losses continued in 2022. In February, a fire that broke out on the Felicity Ace while the car carrier was crossing the Atlantic Ocean caused it to sink in 10,000 feet of water. Numerous Porsches, Bentleys and some Lamborghinis went down with the ship. Russell Group, a London-based risk consultant, estimated total losses of more than $400 million.

The cause of the fire is unknown. Lund said that is a common problem with fires started by lithium-ion batteries. The fires burn so intensely that all evidence is lost.

Lund said AGCS first issued a bulletin about the risk posed by lithium-ion batteries in 2017. He said the carrier decided to follow up on the report this month because of the growing frequency of high-dollar losses.

At present, there is no unified legislation for the safe storage of lithium-ion batteries. What’s more, fire testing has been limited because the technology is continuously evolving.

Lund said loss-control measures will improve over time and awareness about the fire risk increases. He said quite a few new products are being developed. Car carrier operators are exploring the use of “fire blankets” that can be thrown over an electric vehicle with batteries that are experiencing thermal runaways.

In the meantime, AGCS offers these tips to prevent losses: