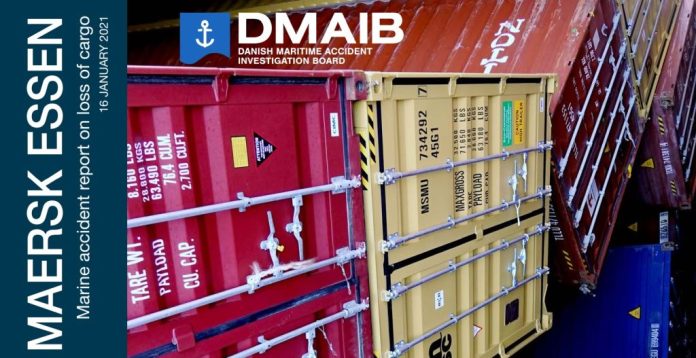 (www.MaritimeCyprus.com) In the morning of 16 December 2020, MAERSK ESSEN lost 689 containers overboard 450 nm north of Hawaii. The loss occurred during a 6-minute period of heavy rolling in which roll angles reached between 25° and 30°. The investigation determined that the heavy rolling was most likely a result of parametric resonance. The acceleration forces acting on the container stacks during the heavy rolling exposed the cargo securing equipment to stress loads which they were neither designed nor able to withstand.

MAERSK ESSEN’s loading condition required the ship to avoid roll angles exceeding 19.18° in order to stay within the stress load limits defined in the ship’s loading and stability computer. This limit was exceeded at the time of the container loss.

To avoid heavy rolling, the ship used weather routing on board and received weather routing advice from an external weather service supplier. The weather routing focused on
avoiding heavy weather and rough sea states. Parametric resonance was not mentioned
in the correspondence between the crew on MAERSK ESSEN and the weather service
supplier, and the crew had no onboard tools to analyse or monitor the risk of parametric
resonance. They had to rely on reactive strategy, if the phenomena occurred. During the
heavy rolling episodes, the bridge crew took action to stop the rolling motions by altering
course and speed. By then, the container stacks had already collapsed.

Consequently, normal work continued, and on the day of the accident, the crew was minutes away from entering the cargo deck to check lashings, as the rolling occurred. If the crew had been on deck, the collapsing container stacks could have resulted in fatalities.

The investigation of MAERSK ESSEN’s heavy rolling accident concluded that parametric rolling was considered a rare phenomenon by the crew. However, the triggering conditions for parametric rolling were not rare for this type of ship in this sea area, and hence it is likely that the ship had experienced resonance effects earlier and on previous voyages, and that accidents are likely to occur again unless effective efforts to avoid the triggering conditions are implemented.

For the line of invents and details on this incident, click below to download the investigation report: