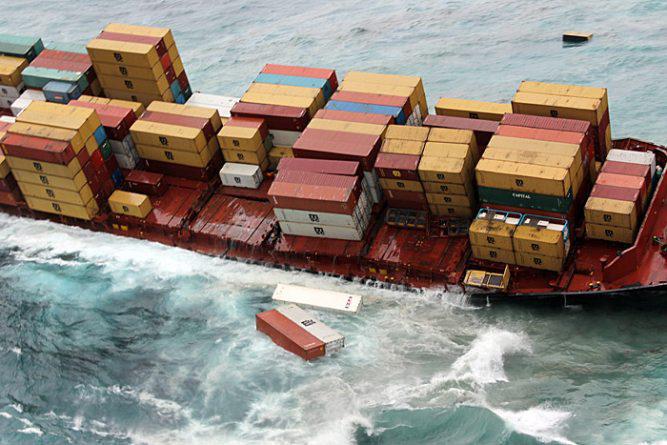 (www.MaritimeCyprus.com) There are many explanations for why containers fall off ships. In the more recent losses, the WSC, International Chamber of Shipping and the Baltic and International Maritime Council told the International Maritime Organization’s (IMO) Maritime Safety Committee that it believed no single factor caused the incidents but rather that there might have been several causes. This included stormy weather, ship design, propulsion issues and how containers are lashed together, including varying regulations around the latter. The degradation of containers and resulting metal fatigue could also be considerations.

In some instances, containers may not be loaded correctly and inadequately secured for rough seas. Container ships are also getting larger and stacked to the equivalent height of a medium-sized building. There are also more of these ships at sea as global trade expands. Climate change-induced storms, especially in the North Pacific could be another culprit.

In 2021, international liner carriers’ onshore staff and crews managed 6300 ships, successfully delivering vital supplies worth $7 trillion to the people of the world, in approximately 241 million containers. The World Shipping Council (WSC) Containers Lost at Sea Report covering 2020-2021 shows that containers lost overboard represent less than one-thousandth of 1% (0.001%). However, the past two years have seen a worrying break in the downward trend for losses, with the average number of containers lost at sea per year since the start of the survey increasing by 18% to 1,629.

From a liner shipping industry perspective, every container overboard is one too many, and everyday carriers work with the other parties in the supply chain to enhance safety. But even with proper packing of the cargo into the container, correct container weight, and proper stowage and securing aboard ship, several factors ranging from severe weather and rough seas to more catastrophic and rare events like ship groundings, structural failures, and collisions can result in containers being lost at sea. The winter of 2020-21 saw an unusually high number of weather-related incidents, and the average losses for the two-year period 2020-2021 were 3,113 compared to 779 in the previous period.

Triggered by these events, maritime actors across the supply chain have initiated the MARIN Top Tier project to enhance container safety, with WSC and member lines among the founding partners. This project will run over three years and will use scientific analyses, studies, and desktop as well as real-life measurements and data collection to develop and publish specific, actionable recommendations to reduce the risk of containers lost overboard.

Initial results from the study show that parametric rolling in following seas is especially hazardous for container vessels, a phenomenon that is not well known and can develop unexpectedly with severe consequences. To help in preventing further incidents a Notice to Mariners has been developed, describing how container vessel crew and operational staff can plan, recognize and act to prevent parametric rolling in following seas. Many more topics, tests and measurements will be undertaken by the project, which will continue reporting on progress and sharing insights on a regular basis through the IMO and other forums.

“Container vessels are designed to transport containers safely and carriers operate with tight safety procedures, but when we see numbers going the wrong way, we need to make every effort to find out why and further increase safety. The liner shipping industry’s goal remains to keep the loss of containers as close to zero as possible. We will continue to explore and implement measures to make that happen and welcome continued cooperation from governments and other stakeholders to accomplish this goal,” says John Butler, President & CEO of WSC.

In addition to the MARIN TopTier project, WSC and member companies have actively contributed to and supported the revision of the IMO’s guidelines for the inspection programs for cargo transport units. WSC also supports the creation of a mandatory reporting framework for all containers lost at sea – an issue that will be on IMO’s agenda in September (CCC 8).

Correct data plays an important part in the work to enhance container safety. The Containers Lost at Sea Report has until now been updated every three years. However, the unusually high number of incidents in the winter of 2020-21 caused great concern, so WSC has decided to increase the frequency of its Containers Lost at Sea report. Hence, this update covers 2020-2021, and in the future, a survey of members will be carried out each year.

Since its inception, WSC has worked to increase safety in container handling and transport. A strong focus has been to reduce the number of incidents with containers lost at sea to limit related injuries and harm to seafarers, possible pollution and navigational safety issues. Many improvements have been achieved over the years including improvements to the Safety of Life at Sea (SOLAS) convention, creation and communication of the Code of Practice for Packing of Cargo Transport Units (CTU Code) and ISO standards for container lashing equipment and corner castings. This work continues.

Maritime Loss Prevention: Cause and Prevention of container loss at sea