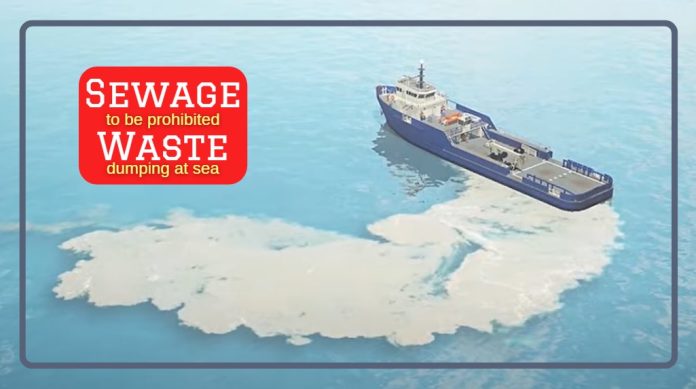 (www.MaritimeCyprus.com) Amendment to the treaty on dumping of waste at sea will remove sewage sludge from the list of wastes that may be given dumping permit.

Parties to the treaties which regulate the dumping of wastes at sea have adopted an amendment to ensure that the dumping of sewage sludge at sea would be prohibited worldwide.

The amendment to the London Protocol will remove sewage sludge from the list of permissible wastes - wastes that may be considered for dumping at sea.

The amendment will enter into force for each Contracting Party immediately on notification of its acceptance, or 100 days after the date of the adoption if that is later.

Sewage sludge is a waste that has been considered for dumping at sea under both the London Convention and London Protocol. Decades ago, substantial volumes of sewage sludge was permitted to be dumped at sea. However, the London Convention and Protocol parties previously commissioned a worldwide review of current practices of managing or dumping sewage sludge at sea. The last meeting concluded that the practice had declined considerably over recent decades, that it was already prohibited under many regional conventions and through domestic legislation, and that alternatives existed for the use of sewage sludge.

The Contracting Parties agreed that there was sufficient evidence and justification for amending Annex 1 of the London Protocol to remove sewage sludge from the list of permissible wastes. The proposal to amend the treaty was submitted by the Republic of Korea and Mexico.

Under the London Protocol, all dumping is prohibited, except for possibly acceptable wastes on the so-called "reverse list" (Annex 1). The list of materials that may be considered for dumping at sea will now include: dredged material (the bulk of material given permits); fish wastes; inert, inorganic geological material; specific bulky items; vessels and platforms or other manmade structures at sea; organic material of natural origin; and carbon dioxide (CO2) streams from carbon dioxide capture processes.

The meeting agreed on a statement on marine geoengineering. Read more here.

50 years of the London Convention

In 2022, IMO is marking 50 years since the adoption of the London Convention. The adoption of the Convention was a major achievement, which, along with the 1972 United Nations Conference on the Environment in Stockholm, constituted the first steps to truly put the environment at centre stage and take responsibility for the harm humans have done to the ocean.

The purpose of the London Convention is to control all sources of marine pollution and prevent pollution of the sea through regulation of dumping into the sea of waste materials. A so-called "black- and grey-list" approach is applied for wastes, which can be considered for disposal at sea according to the hazard they present to the environment. For the blacklist items dumping is prohibited. Dumping of the grey-listed materials requires a special permit from a designated national authority under strict control and provided certain conditions are met. All other materials or substances can be dumped after a general permit has been issued.

The purpose of the Protocol is similar to that of the Convention, but the Protocol is more restrictive: application of a "precautionary approach" is included as a general obligation and a "reverse list" approach is adopted, which implies that all dumping is prohibited unless explicitly permitted.