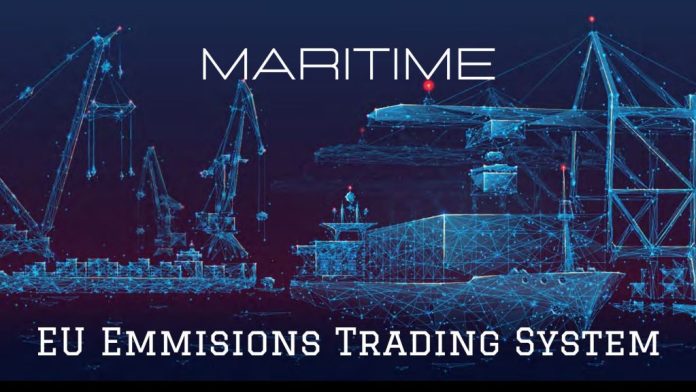 (www.MaritimeCyprus.com) Update on the revision of the European Emissions Trading System (ETS). As part of the European Commission's “Fit for 55” package, aimed at reducing EU-wide net GHG emissions, the European Parliament and Council have come to an agreement on the revision of the EU Emissions Trading System (ETS) Directive 2003/87/EC, introducing the extension to maritime transport by January 1, 2024. Beginning in 2025, shipping companies will have to surrender EUAs based on their verified emissions as quantified per EU MRV Regulation (EU) 2015/757.

ETS is a ‘cap-and-trade’ system for cutting down GHG emissions. It has two principles, setting a ceiling on the yearly maximum amount of GHG emissions and the trading of EU emission allowances (EUAs). To that end, covered installations have to surrender an EUA at the end of each period for each tonne of carbon dioxide equivalent (CO2e) they emitted during that period.

Inclusion of the Maritime Industry:

Beginning from 2025, shipping companies will have to surrender EUAs based on their verified emissions as quantified as per Regulation (EU) 2015/757 (Monitoring, Reporting and Verification of CO2 emissions from maritime transport, MRV). To ensure a smooth transition, shipping companies will be given a three-year phase-in period where they will surrender allowances for a portion of their emissions based on the following schedule:

The regulated entity shall surrender sufficient allowances by 30 April of each year to cover its emissions during the preceding year.

EU ETS will initially cover the CO2 emissions generated from ships of 5,000 GT and above, which call at EU ports. More specifically, shipping companies will have to surrender allowances for:

From 1 January 2026, EU ETS will be extended to also cover methane (CH4) and nitrous oxide (N2O) emissions. From 1 January 2027, the regulation will also be applicable to offshore vessels of over 5,000 GT. The inclusion of ships, including offshore ships, below 5000 GT but not below 400 GT will be subject to a review by the Commission by not later than 31 December 2026.

The European Union will further implement anti-evasion measures, which will include certain stops at non–Union ports which are in a vicinity of less than 300 nautical miles from the Union’s territory.

Until 31 December 2030, the Directive will allow for exemptions for certain types of vessels, and certain trades within the EU as follows:

The main objective of EU ETS is to drive the decarbonization of EU. To that end, a certain amount of the revenue from the EUAs auctions will be allocated to the maritime sector with the objective to support innovation in low-carbon technologies and contribute to zero pollution objectives, such as the improvement of energy efficiency of ships, ports, sustainable alternative fuels, innovations to ice–classed vessels.

The political agreement is preliminary pending the adoption of the legislation by the European Parliament and Council, its subsequent publishing in the EU’s Official Journal, and entry into force.