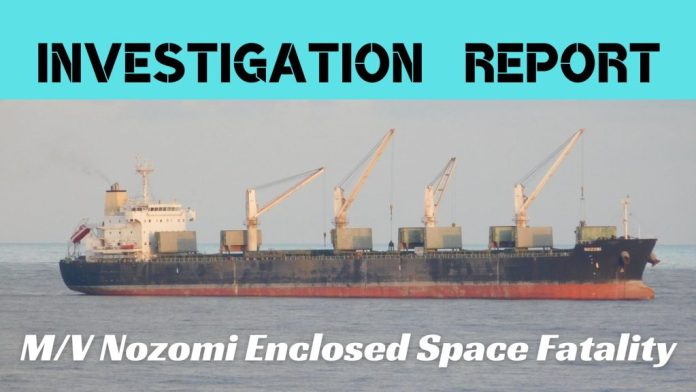 On 1 April 2022, after completing the loading of coal cargo, the Singapore registered bulk carrier, Nozomi, was anchored at the Tanjung Api-Api anchorage, South Sumatera, Indonesia.

While waiting for cargo export documents and scheduled pilot to embark, four crew members were tasked to grease the booby hatch dog handles for the No.5 cargo hold.

During the greasing process, one of the four crew members, an Able Seafarer, was discovered lying inside the cargo hold on top of the coal cargo. An emergency rescue was initiated but could not save the Seafarer.

From the information gathered, the following findings are made. These findings should not be read as apportioning blame or liability to any particular organisation or individual.

The Seafarer had likely entered the No.5 cargo hold without the knowledge of the other crew members to retrieve a dog handle. The cargo hold had low concentrations of oxygen due to the cargo of coal. The ASD1 collapsed while climbing out of the cargo hold.

The maintenance of the booby hatch was an unplanned task and did not require entering of cargo hold. The dropping of parts into the cargo hold was not anticipated for this maintenance.

The risks associated with working in the vicinity of a hazardous environment (cargo hold loaded with coal) had not been identified, and a risk assessment was not carried out.

The hazards associated with the coal cargo had been overlooked when the maintenance of the booby hatch was being carried out.

There was a misconception on board the ship that EEBD could be used for rescue operations and the crew used inappropriate equipment to rescue the Seafarer. The crew also did not follow the assigned duties as per the muster list.

There were no signages to warn the crew to treat the cargo hold as an enclosed space when it has been sealed for some time.

For more details, download below the Full Investigation Report: