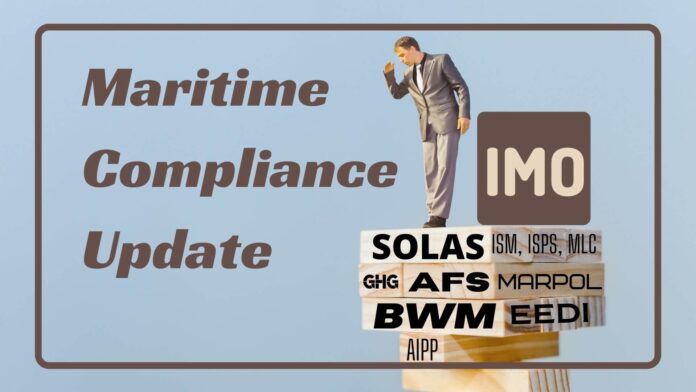 (www.MaritimeCyprus.com) Listed here below are updates on the Statutory IMO requirements.

Amendments to MARPOL Annexes I, II, IV and VI were adopted to provide for regional arrangements as an acceptable way to satisfy MARPOL obligations to provide port reception facilities that cover ports within Arctic waters. Consequently, the 2012 Guidelines for the Development of a Regional Reception Facilities Plan was amended to be aligned with the MARPOL amendments.

Amendments to MARPOL Annex V were adopted to make the Garbage Record Book mandatory also for ships between 100 and 400 gross tons.

Amendments to MARPOL Annex VI were adopted to establish a Mediterranean Emission Control Area for sulphur oxides and particulate matter. The requirement will be the same as for other sulphur ECAs, mandating the use of fuel oil with a sulphur content not exceeding 0.10% or the use of an exhaust gas cleaning system.

MARPOL Annex VI – information to be included in the BDN

Amendments to MARPOL Annex VI, Appendix V were adopted to extend the information to be included in the BDN to also include the flashpoint of the fuel oil, or alternatively a statement that the flashpoint has been measured at or above 70°C.

Amendments to MARPOL Annex VI, Appendix IX were adopted to include the attained and required Carbon Intensity Indicator (CII) values, the CII rating and attained Energy Efficiency Design Index for existing ships (EEXI) in the required information to be submitted to the IMO Ship Fuel Oil Consumption Database.

The amendments will enter into force on 1 May 2024. However, administrations are invited to consider early application from 1 January 2024 to ensure that the CII data for 2023 is reported to the IMO.

MEPC 79 revised the format of the BWRB in Appendix II of the Annex to the Ballast Water Management (BWM) Convention. The revised BWRB introduces code letters (A-H), similar as in the oil record book, and aims to improve the recording of issues around BWM systems. The amendments will be circulated for adoption at MEPC 80 in July 2023.

MEPC 79 agreed that it should be permitted to use ballast tanks for the temporary storage of treated sewage and grey water. Guidance will be developed at the next MEPC to set out appropriate actions and uniform procedures to ensure compliance with the BWM Convention, and in particular, the D-2 standard, when the ballast tanks are returned to ballast water storage.

MEPC 79 discussed and established a list of fundamental principles to consider when developing further guidance for ships encountering challenging water quality. Ships are expected to return to D-2 compliance after experiencing challenging uptake water, and bypassing a BWM system should only be used as a last resort. Communication with the port receiving the uptake water is crucial. Further work on guidelines will be conducted at MEPC 80 in July 2023.

MEPC 79 revised the EEDI calculation guidelines to include a CO2 conversion factor for ethane, a reference to the updated ITCC guidelines, and a clarification that in case of a ship with multiple load line certificates, the maximum certified summer draft should be used when determining the deadweight. MEPC 79 also discussed applying the shaft and engine power limitation concepts to the EEDI and agreed that, in principle, these concepts should be added in a future revision.

A possible Phase 4 of the EEDI was discussed, with several member states advocating for developing it into an energy-based index by removing the CO2 conversion factor, while others wanted to also include methane (CH4) and nitrous oxides (N2O). However, no decisions were taken, and further discussions were deferred to later sessions of the Committee.

MEPC 79 discussed establishing a mandatory licensing scheme for bunker suppliers. However, there were no agreements to do so, but member states were encouraged to apply the voluntary licensing scheme in the Guidance for best practice for Member State/coastal State (MEPC.1/Circ.884/Rev.1).

MEPC 79 approved a clarification on the Unified Interpretation of Appendix IX of MARPOL Annex VI, that the DCS reporting includes boil-off gases (BOG) used for propulsion or operational needs such as in a boiler, or burnt in a Gas Combustion Unit (GCU) for cargo tank pressure control, or for other operational purposes.

MEPC 79 approved an extension of the Unified Interpretation of Regulation 18.3 of MARPOL Annex VI related to NOx emissions when using biofuels, that it should also be applicable for fuels with a synthetic fuel content of up to 30%. In principle, such fuels fall under the definition of Marine Fuel Oil derived from petroleum refining (Regulation 18.3.1) and no further NOx testing is required.

MEPC 79 approved Unified Interpretations of Regulation 26 of MARPOL Annex VI related to the Ship Energy Efficiency Management Plan (SEEMP). A new ship should comply with the requirement at the time of delivery. Furthermore, for ships delivered on 1 October or later, the following year should be the first year of the three-year implementation plan, and the attained CII for the remaining part of the year of delivery should not be included when determining whether the ship should develop a corrective action plan under Regulation 28.

Revision of the IMO GHG Strategy

There was an extensive exchange of views on the scheduled revision of the IMO GHG Strategy. MEPC 79 revised the Guidance on process and methodological elements for the conduct of comprehensive impact assessments (MEPC.1/Circ.885).

There was limited convergence between member states on the vision and levels of GHG reduction ambitions in the strategy. The main divergence in views is on those calling for full decarbonization by 2050, and those calling for further assessments on feasibility to achieve such an ambition and the potential impacts on states before such a decision can be made. There also remains a divergence of views on the necessity of intermediate GHG reduction targets being set for 2030 and 2040.

There was an extensive discussion on potential mid and long-term measures at a Working Group meeting held the week prior to MEPC 79. At this meeting, proposals for various measures were discussed and there was an increased support for a basket of measures combining technical and economical elements. On market-based measures there was a convergence towards a levy scheme, imposing a set price on well-to-wake or tank-to-wake GHG emissions, possibly in combination with a rebate system where the revenues are partly provided back to vessels to cover the price gap between fossil and low or zero-carbon fuels. Additionally, there was significant support for a technical measure in the form of a well-to-wake GHG intensity fuel standard.

Further discussions will take place at Working Group meetings to be held from 20 to 24 March, and during the week prior to MEPC 80 in July 2023. The decision on which measures to develop into regulations will be made at MEPC 80.

In addition to the amendments to the DCS adopted at MEPC 79, there was a discussion on adding further elements, including mandatory cargo data reporting. The discussions will continue at future meetings of the MEPC.

A brief discussion was held on provisions for considering on-board CO2 capture and storage in GHG regulations under MARPOL Annex VI. Due to time constraints, the issue was deferred to MEPC 80.

A brief discussion was held on developing guidelines on life cycle GHG/carbon intensity. The correspondence group will continue its work on the guidelines, and a first version is expected to be finalized at MEPC 80 in July 2023.

MEPC 79 agreed to revise the terms of reference for the IMO study on marine plastic litter from ships to make it more specific by adopting a stepwise approach and pursue subprojects that address specific data gaps. Member states and international organizations were invited to submit proposals to MEPC 80 to assist the Committee on how to progress with the IMO Study.

Identification and protection of special areas, ECAs and PSSAs

MEPC 79 agreed in principle to designate the North-western Mediterranean Sea as a PSSA (Particularly Sensitive Sea Area). The associated protective measures need to be further developed before the area is designated as a PSSA.