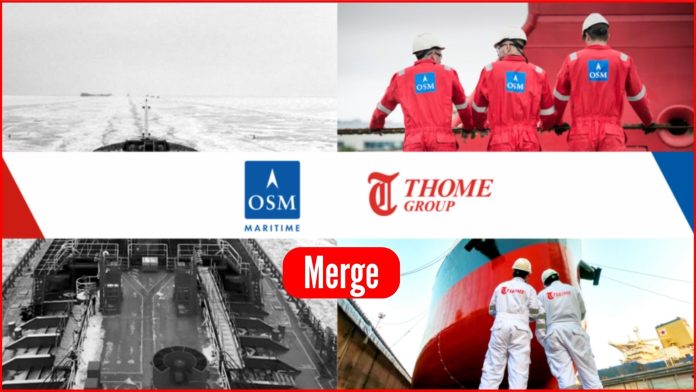 (www.MaritimeCyprus.com) OSM Maritime Group and Thome Group have agreed to a merger of the two companies. By joining forces, the companies will be building an even stronger platform on which they will continue to deliver world-class ship management services to their customers and continue to improve. The combined company will be named OSM Thome.

The two companies, both of Norwegian heritage, have been negotiating the merger for many months. Both OSM Maritime and Thome are deeply rooted in the Norwegian shipping tradition and expertise, and they combine this with the modern drive of Asian business enterprise. The headquarters of the combined company will be located in Arendal, Norway, with strong technical management hubs maintained in Singapore and Europe.

The deal will grow the merged entity high up the ranks in global shipmanagement. The two companies manage around 1,000 ships in various segments (450 ships under full technical management and 550 vessels under crew management) and have a combined workforce of around 32,000 (2,000 employees onshore and a combined pool of 30,000 seafarers) with a presence in 22 countries.

Thome turns 60 this year. It is the first independent shipmanager to set up shop in Singapore, run by Norwegians Olav Eek Thorstensen and his son Claes Eek, with Olav Nortun serving as CEO.

Established in 1989, OSM Maritime is the largest shipmanager in Norway. Its last sizeable acquisition was three years ago, when it bought SeaTeam Management from Frontline and Golden Ocean.

Under the newly merged OSM Thome Norbye will become CEO while Olav Nortun will be COO. OSM founder Bjørn Tore Larsen will become Chairman of the new Board of Directors and Thome’s Claes Eek Thorstensen will be the Vice Chairman. The company will be headquartered in Norway with Singapore its largest technical management centre.

In terms of the ownership structure of the new company they declined to give details. The new company will be owned by three parties: Bjørn Tore Larsen who currently owns 51% of OSM, private equity firm Oaktree which owns 49% of OSM, and the Thorstensen family which owns Thome.

Completion of the merger is conditional upon approval from competition authorities and is expected during the first quarter of 2023.

OSM Maritime Group provides Ship Management services to the Offshore and Maritime industries. OSM’s core services are technical and crew management while at the same time, it offers services that relate to and improve those core services.

These are New Building supervision, Marine Insurance and Claim Handling, OSERV Catering, Nordic Medical Clinic, Training, accounting outsourcing and more. With a global footprint and a focus on its most important asset, its people, OSM Maritime Group offers flexibility and opportunity for clients to expand their presence in new regions and the peace of mind that comes with a lean and efficient setup.

OSM was established in Arendal in 1989 and is now represented at 21 different locations around the world. 1.000 employees onshore and 16,000 seafarers from 70 countries are involved in the day-to-day operation of nearly 700 ships of various types.

More information about OSM Maritime Group is available at: https://osm.no/

Thome is a dynamic provider of integrated services to the international shipping and offshore industries. From ship management, and offshore management, to crewing and training, Thome offers a complete range of products and services essential in managing a wide range of global marine assets.

Thome was established in Singapore in 1963 and has been run as a family business since its humble beginnings, growing into a world leader within ship management that it is today. The company has a presence in 11 countries and around 900 employees onshore. More than 13,000 seafarers are involved in the day-to-day operation of nearly 370 ships.

More information about Thome Group is available at: https://thome.com