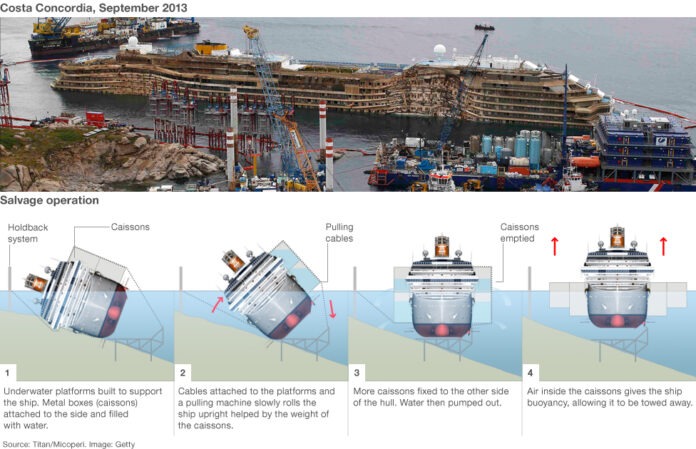 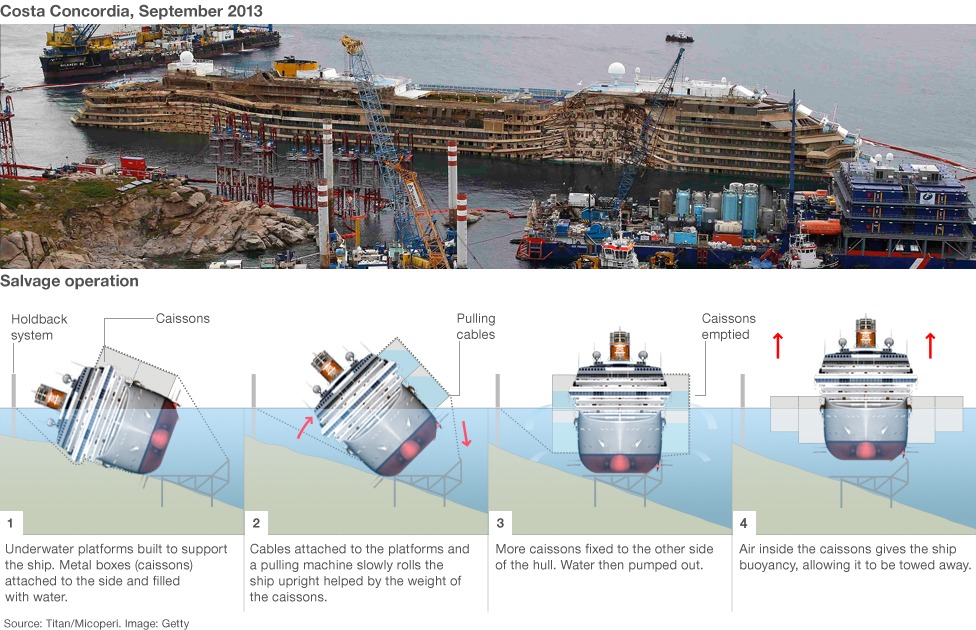 Two refloating sponsons is what separates the Costa Concordia cruise ship from leaving the shores of Giglio Island, Italy, where it has lain since its sinking that left 32 people dead on January 13, 2012. The global parbuckling project is currently over 90 percent complete, and the ship is set to be removed before the end of the Italian summer “ but where it will then be towed is still an open question. The operations are going well, Franco Porcellacchia, the engineer coordinating the removal project on behalf of the Costa Crociere company which owns the cruise ship, told IPS, and, according to our forecasts, we will be able to refloat and remove the ship by July 20 That still does not answer the question of where the wreck will end up. While, on one hand, the dismantling constitutes a major project and economic opportunity for the port that will be chosen, on the other, Costa Crocier so-called club of insurers, comprising the companies that will fund the operation, are obviously concerned about its costs. And in the middle lie environmental concerns.

Despite all the rumours, at the moment there is no official decision, but only two ports [Piombino in Tuscany and Genoa in Liguria] fighting over the contract Alessandro Giann, Greenpeace Italy Campaign Director told IPS. There are also many unanswered questions they still need to address, both concerning the economic and the environmental aspects of the project. Earlier this week, the 'Conferenza dei Servizi' “ the committee comprising representatives of all competent authorities evaluating the projects drawn up by Costa Crociere “ failed to reach an agreement, because two of the 19 authorities involved in the decision (the Tuscany Region and the Province of Grosseto) voted against the Genoa option. The Italian Council of Ministers (Cabinet) is now expected take the final decision next week. We ran an international tender, as our insurers asked us to do, said Porcellacchia, and then we restricted the options, having the safety of the operations as our priority. We wanted to make sure that the ones who offered to do the job had the ability and the infrastructures to complete it, which is all but obvious. We eventually chose Genoa because it offered the best guarantees in this sense. In a press statement, the Regional Agency for Environmental Protection in Tuscany (ARPAT) said that it had voted in favour of the Genoa option given the fact that it was a yes or no question and no other option had been presented by Costa Crociere.

ARPAT did not agree on the methodology of the decisional process, because no other alternative had been taken into account in order to reduce environmental risks but, considering the urgency of the matter“ the Costa Concordia must be removed before the end of the summer for meteorological reasons “ it approved the choice of Genoa, provided that it was shown that the port of Piombino would not be ready to receive the wreck in time. In other words, Genoa would be acceptable to ARPAT only if the Piombino option had to be rejected. The route to Genoa from Giglio Island crosses the Whale Sanctuary, an international marine protected zone aimed at the safeguard of marine mammals. We are witnessing a systematic underestimation of the environmental risks, Greenpeace and WWF wrote in a joint press release. We are very concerned about the length of the towing and how they are planning to get accurate weather forecasts for that period, Giann stressed. Guarantees on the structural resistance of the ship should also be given. We addressed all these questions to the Ministry for the Environment, but we never received an answer. For his part, Porcellacchia is confident about Costa Crociere choice: The ship will be able to travel at a speed of two knots, which allows it to reach Genoa port in four days. The trip could even be faster, but in order to avoid any risk, we are also considering the unlikely chance of finding bad weather, in which case we might need some more time. We truly the believe that our proposal will be approved, because it is solid and has no reason to be rejected he concluded. The Observatory on the rescue of Costa Concordia, also taking part in the Conferenza dei Servizi, is a pool of specialists that work together to evaluate the different options and support the decision of Franco Gabrielli, who was appointed by the Italian Government as Commissioner for the Costa Concordia emergency. Together with the Italian National Institute for Environmental Protection and Research (ISPRA), the Ministry of Infrastructures and Transport, the Ministry of the Environment and the Coast Guards, ARPAT is on the board of the Observatory. It is not us, the public administration, that will decide eventually,Marcello Mossa Verre from ARPAT explained to IPS. Costa and its club of insurers, based on technical and economic factors, will take the final decision, but we are the ones verifying that the conditions to move forward are in place.

ARPAT has been monitoring the situation of the marine ecosystem since the shipwreck, reporting overall no major damages due to the leaking of polluting substances from the Costa Concordia. The real damage so far, and there is no need to monitor the area to see it, has been caused by the presence of the ship and the work site itself,Mossa Verre explained. Hundreds of people working daily and continuously have inevitably had an impact on the local marine environment, such as on posidonia [a species of seagrass]. While most of the liquid fuels were extracted right after the shipwreck through a hot-tapping system, there are still several tons of fuel oil, lube oil, cleaning products and chemical products used for the wellbeing of the guests. â€oeLuckily, the containers have resisted so far,Mossa Verre told IPS. There are traces of contamination of the internal waters but the levels are lower than expected. Obviously, the longer they remain there, the higher is the risk of leaking. Porcellacchia confirmed the presence of possibly dangerous substances inside the ship, but also claimed that most of them have been removed already: We individuated four critical areas, three of which have been reclaimed. And we are operating on the fourth one now, which is approximately where the pantries are located Environmental organisations, including Greenpeace, are also concerned with the possibility that the towing of the ship will cause a rinsing effect, in which clean water entering the wreck would be contaminated by these polluting substances and flushed back into the sea. This insing effect has been constant for the last two years,Porcellacchia responded, and yet the monitoring tells us that there is no critical contamination of the water Mossa Verre conclusions are more cautious, but he is also optimistic about the outcome of the operations: There are environmental risks, this is out of question. But so far Costa has cooperated with us with great openness. After all, it is also their interest to find an elegant solution. They have the eyes of the whole world on them.