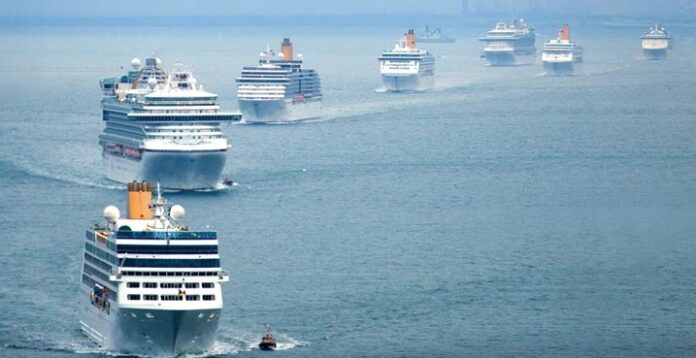 Passenger ships are monitored regularly following international standards for the safety of passengers and crew. Minimum standards were put in place more than a century ago, after the sinking of the Titanic.

When was the first convention for the safety at sea created?

The first convention originated in the wake of the sinking of the RMS Titanic in 1912. An international conference was called in November 1913, aimed at creating international minimum standards for the safety at sea. A first version of the "International Treaty for the Safety of Life at Sea" (SOLAS) was compiled, and has since been repeatedly updated. The London-based International Maritime Organization (IMO) has held responsibility for the treaty since 1960; currently a 1974 version is in place. The IMO depends on mutual decisions by its members, so change often takes quite some time. The most recent amendment entered into force on January 1, 2013.

How are safety regulations monitored?

In 1993, the IMO adopted the International Management Code for the Safe Operations of Ships and for Pollution Prevention (ISM Code). The code defines what needs to be done to guarantee safe operation of a ship. Every ship owner and operator commits to compiling a set of documents known as the Safety Management System (SMS). They are bound to enforce the regulations, and check compliance. As a rule, the state under whose flag the vessel sails authorizes a recognized Classification Society to survey compliance. The Adria Norman Atlantic, which caught fire on Sunday morning, was last inspected five months ago.

When does inspection begin, and what doe monitors check?

Inspection begins with the construction of the ship. The Classification Society checks building materials and components, and watches over the construction the on the wharf. Once the vessel is finished, the rescue and safety technology is tested. After the ship has been cleared, the Classification Society checks it on an annual basis. The state of the ship is thus constantly documented.

What happens after the inspection?

Port State Control gives a ship that meets all the requirements a class "A" document. If there are defects, they are noted in the inspection report along with the measures needed to correct the problems. Finally, the ship's data and the inspection report findings are transmitted to a central electronic data bank in Lisbon. If a ship does not meet the safety requirements, local authorities have the right to prevent it from leaving port. After the cruise liner Costa Concordia ran aground on rocks, numerous major shipping companies committed to stricter self inspection and higher safety standards.

How are safety standards ranked among various states that have ships sailing under their flag?

The Paris Memorandum of Understanding (MOU) on Port State Control takes care of that. It was created at France's initiative after the oil tanker Amoco Cadiz sank off the coast of Brittany in 1978. The memorandum has 27 signatories. Every year, the Paris MOU specifies the states' safety levels in "white", "grey" and "black" lists. According to the most recent list, published in July, France has the safest ships, followed by Norway, Sweden and Denmark. Germany ranks ninth. The poorest performing flags are the island nation of Dominica, Honduras and the United Republic of Tanzania.

How many passenger ships sank over the past years?

Insurers "Allianz Global Corporate & Specialty" document the loss of 90 passenger ships from 2001to 2012. They didn't all necessarily sink, however: the figure documents their final failure. Losses have dropped significantly in the past eight years. While more than ten ships were lost annually until 2006, that figure decreased to six ships that were written off every year over the past six years.

When a ship threatens to sink - on average, how long does it take to evacuate?

According to the SOLAS accord, lifeboats must be ready to be boarded and launched at the latest 30 minutes after the captain has given the appropriate signal. Within this time frame, they must also reach an acceptable safety distance from the ship in distress. Since 2002, cruise ships must be fully evacuated within 80 minutes. The Adria Norman Atlantic's disaster off the Greek coast shows, however, that this time frame is exceeded many times over if conditions are unfavorable.