The surge of piracy in South-East Asia waters continues as ships passing the Straits of Malacca and Singapore are falling victim to acts of piracy.

By far, the most significant incident suggests activities going beyond the usual act of armed robbery or theft on board ship.

On 11 June 2015, eight men armed with pistols and machetes boarded the Orkim Harmony a Malaysian registered tanker whilst it was nearing the end of her voyage. The Orkim Harmony was hijacked about 30 nautical miles from the Malaysian Port of Tanjung Sedili and carrying about 6,000 Tonnes of RON95 gasoline, worth more than USD 5 million. After the Pirates restrained the crew, they repainted and renamed the vessel Kim Harmon. During a joint search missions with the Malaysian Navy, an Australian air force patrol eventually spotted the stolen tanker. The pirates, all Indonesian, were arrested in Vietnamese waters.

The Orkim Harmony heist was  followed by another brazen attack on 8 August 2015 of a Singapore-registered tanker, MT JOAQUIM. The MT JOAQUIM was heading from the Indonesian Port of Tanjung Pinang to the island of Langkawi off the northern coast of Malaysia where it was hijacked and one crew member was injured. It was later found miles off Tanjung Keling with the 3,500 metric tonnes of marine fuel oil on board the tanker reported missing.

South-East Asian pirates unlike their Somali counterparts, hope to steal bunkers, palm oil and chemicals from slow moving tankers. In most cases the ships and crew is released once the bunker or cargo has been siphoned. Whilst only a fraction of the ships which sails the Straits are affected, seamen are now clearly worried as the attacks are clearly getting more violent. During the heist of the Orkim Harmony, one of the crew suffered a gunshot wound to the thigh.

The situation was different 10 years ago where South-East Asian nations appeared to have pirates on the run. As of mid August 2015, following the attack on MT JOAQUIM, more than 70 ships have fallen prey to pirate attacks in the Malacca and Singapore Straits. According to the International Chamber of Commerce’s International Maritime Bureau, during the first six months of 2015, pirates launched an attack once every two weeks on average in South-East Asian waters. In fact 68% of the 134 piracy incidents reported worldwide in the first six months of 2015 occurred in South-East Asia, compared with 53% of the 116 incidents in the same period of 2014.

Shipowners wants regional navies to beef up anti-piracy operations but they  themselves are reluctant to report attacks to avoid alarming their clients and insurers. It is even more worrying where there is speculation that crew members are complicit in some hijackings.

The Malaysia Maritime Enforcement Agency has deployed a helicopter-equipped special tasks and rescue (“STAR”) team at Johor Bahru. The STAR team will respond to robbery and hijacking and sometimes operate on vessels managed by other ships. Indonesia has not established any new task forces but it is stepping up its cooperation and communication with Malaysia in light of the attacks in recent months.

Shipping and security experts welcomed the latest move, but has urged for a more active approach for permanent security especially during the night. What is the solution to effectively address the surge in piracy within the region?

Patrolling at this stage would be deemed insufficient as regional partners need to come together and step up their game and eradicate piracy together. The industry as a whole must come together and merchant must follow best management practice of ship security to eradicate piracy. It would also require cooperation between regional police forces, port authorities and customs to prevent theft and hijackings to siphon cargo on board vessels.

There is also a rising voice for some quarters regarding armed guards onboard. In some camps, it has been said that armed deterrence on board has significantly contributed to a reduction of piracy on Somalia and the Gulf of Aden. In South- East Asia unfortunately, strict gun laws in a various countries that comprise South East-Asia means that armed deterrence may not be an option available to them.

Beijing has also taken the effort to hold joint maritime drills with Malaysia in the Straits of Malacca. According to Chinese Defense Ministry spokesman Yang Yujun, the drills will focus on disaster relief, search and rescue, and hijack rescue.

It remains to be seen whether the efforts of Malaysia and Indonesia will be deemed fruitful. In the meantime, Shipowners must at all cost ensure they follow the best management practice of ship security. 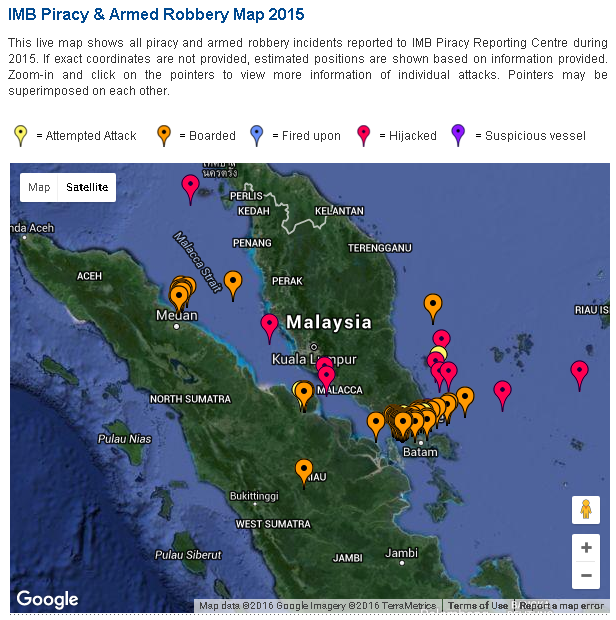