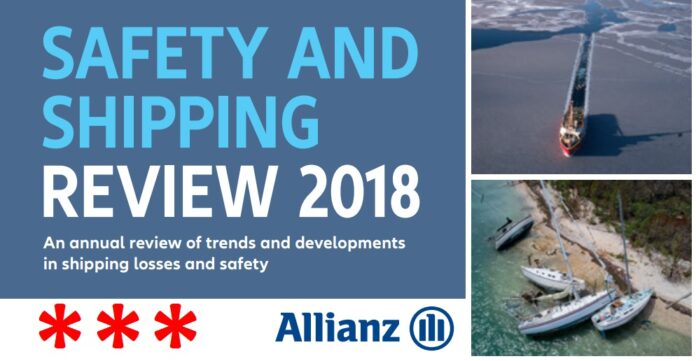 (www.MaritimeCyprus.com)Â Shipping is the lifeblood of the global economy, transporting 90% of global trade.Â Allianz Global Corporate & SpecialtyÂ (AGCS) recently released its annual report,Â Safety & Shipping Review 2018.Â The report highlights cyber, climate risks and human error as the main factors threatening shippingâ€™s safety progress during the 12Â months prior to December 31,Â 2017 (full report can be downloaded at the bottom of this article).

Highlights from this yearâ€™s findings, which analyzes reported shipping losses over 100 gross tons, include:

Large shipping losses have declined 38% over the past decade, according toÂ Allianz Global Corporate & Specialtyâ€™sÂ (AGCS)Â Safety & Shipping Review 2018, with this downward trend continuing in 2017. Recent events such as the collision of the oil tanker â€œSanchiâ€ and the impact of the NotPetya malware on harbor logistics underscore both the traditional and emerging risk challenges faced by the shipping sector. 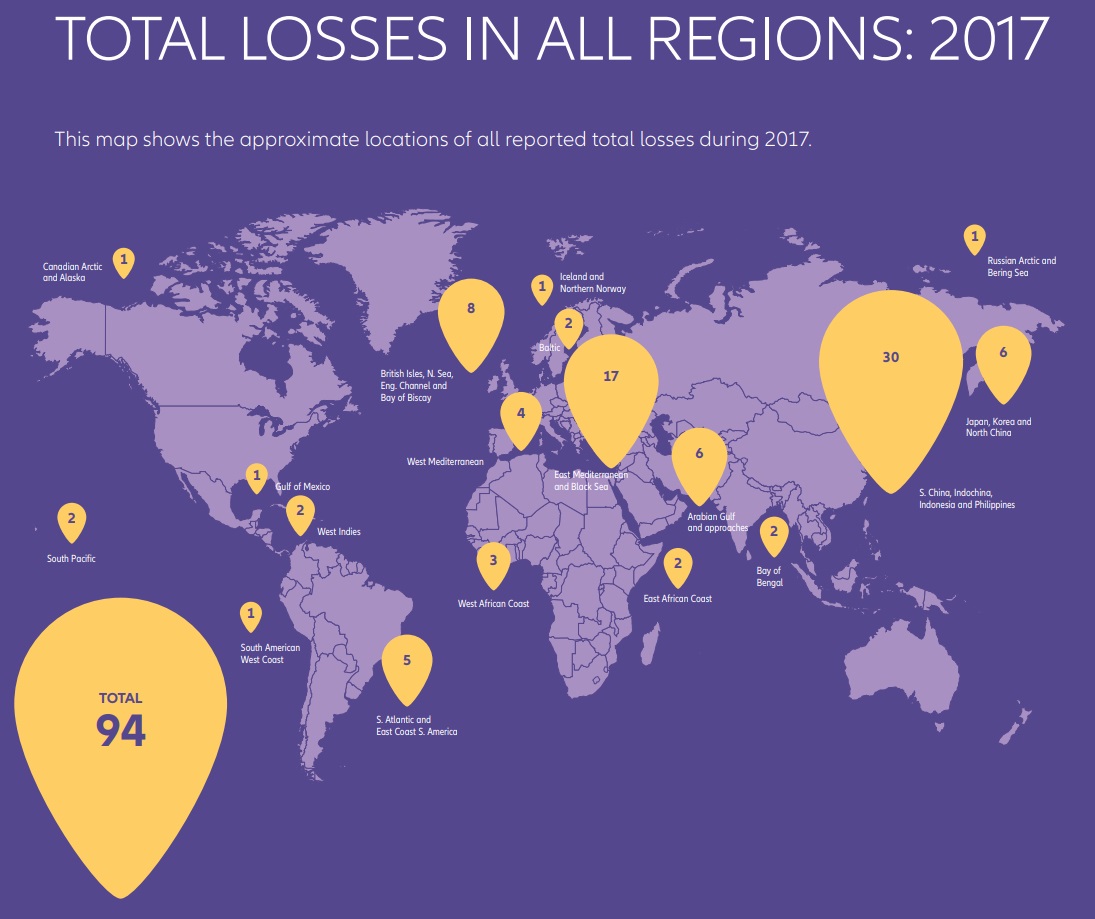 There were 94 total losses reported around the shipping world in 2017, down 4% year-on-year (98) â€“ the second lowest in 10 years after 2014. Bad weather, such as typhoons in Asia and hurricanes in the U.S., contributed to the loss of more than 20 vessels, according to the annual review, which analyzes reported shipping losses over 100 gross tons (GT).

â€œThe decline in frequency and severity of total losses over the past year continues the positive trend of the past decade. Insurance claims have been relatively benign, reflecting improved ship design and the positive effects of risk management policy and safety regulation over time,â€ says Baptiste Ossena, Global Leader Hull & Marine, AGCS. â€œHowever, as the use of new technologies on board vessels grows, we expect to see changes in the maritime loss environment in the future.â€

New risk exposures for the shipping sector include: 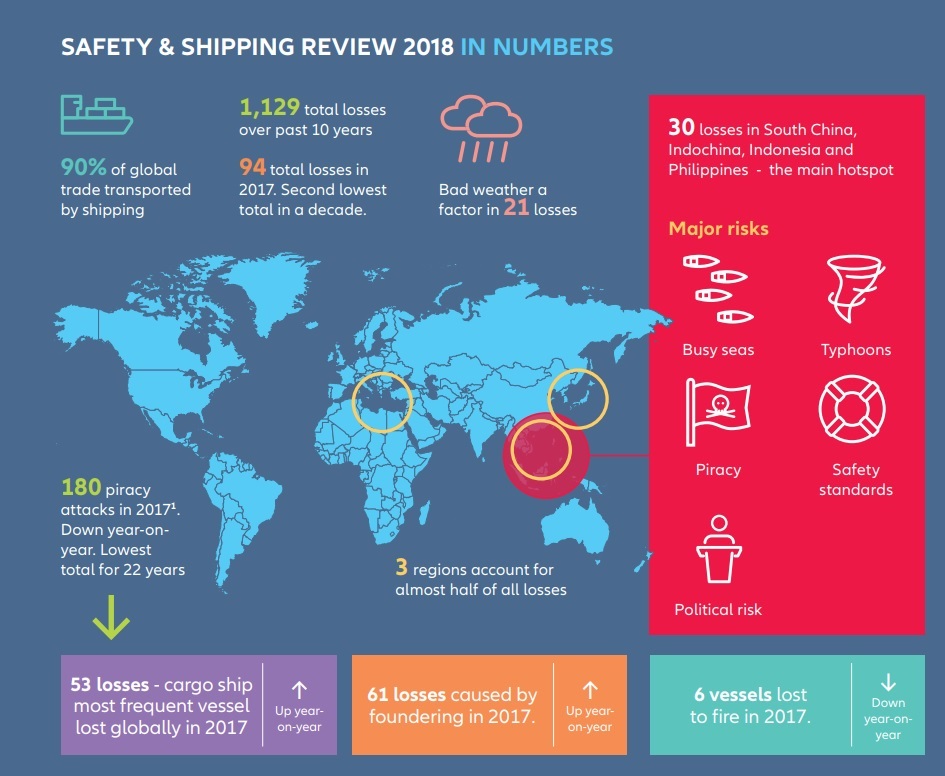 Nearly one third of shipping losses in 2017 (30) occurred in the South China, Indochina, Indonesia and Philippines maritime region, up 25% annually, driven by activity in Vietnamese waters. This area has been the major global loss hotspot for the past decade, leading some media commentators to label it the â€œnew Bermuda Triangle.â€ The major loss factors are actually weather - in November 2017, Typhoon Damrey caused six losses, busy seas and lower safety standards on some domestic routes.

Outside of Asia, the East Mediterranean and Black Sea region is the second major loss hotspot (17) followed by the British Isles (8).There wasÂ  a 29% annual increase in reported shipping incidents in Arctic Circle waters (71), according to AGCS analysis.

Cargo vessels (53) accounted for more than half of all vessels lost globally in 2017. Fishing and passenger vessel losses are down year-on-year. Bulk carriers accounted for five of the 10 largest reported total losses by GT. The most common cause of global losses remains foundering (sinking), with 61 sinkings in 2017. Wrecked/stranded ranks second (13), followed by machinery damage/failure (8).

Analysis shows Friday is the most dangerous day at sea â€“ 175Â  of 1,129 total losses reported have occurred on this day over the past decade. Friday the 13thÂ really can be unlucky â€“ three ships were lost on this day in 2012 including the Costa Concordia, the largest-ever marine insurance loss. 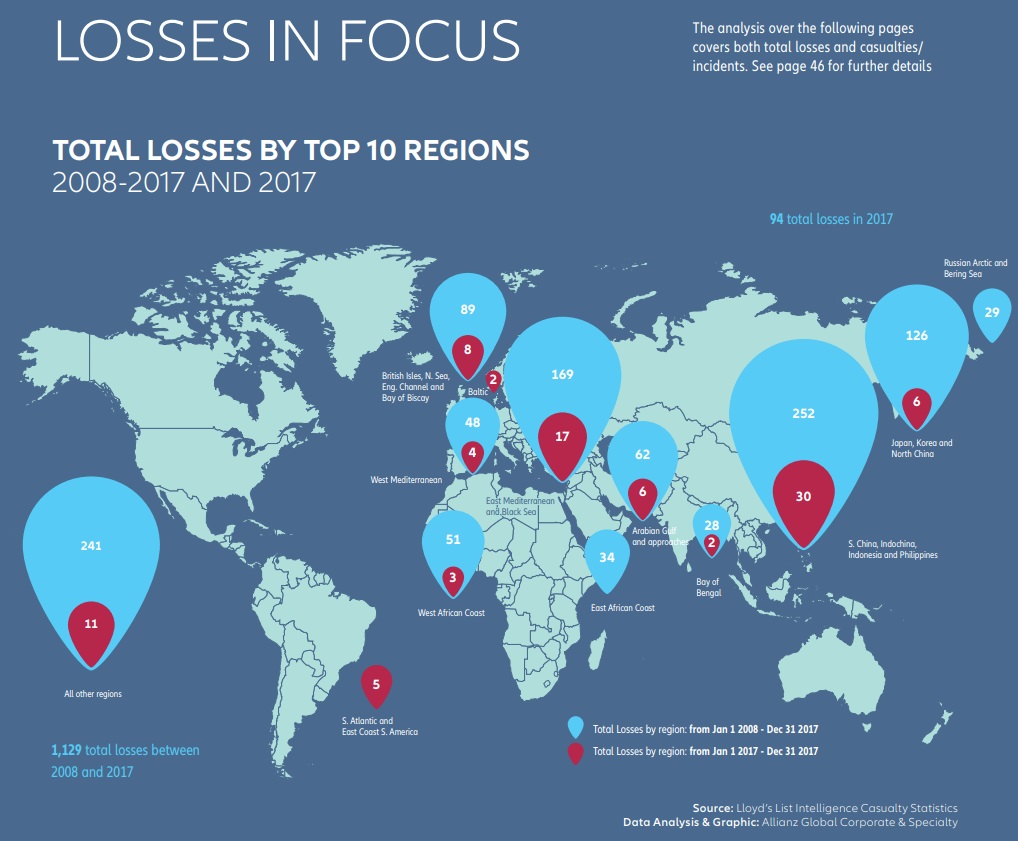 Despite decades of safety improvements, the shipping industry has no room for complacency. Fatal accidents such as the â€œSanchiâ€ oil tanker collision in January 2018 and the loss of the â€œEl Faroâ€ in Hurricane Joaquin in late 2015 persist, and human behavior is often a factor. It is estimated that 75% to 96% of shipping accidents involve human error. It is also behind 75% of 15,000 marine liability insurance industry claims analyzed by AGCS â€“ costing $1.6bn. 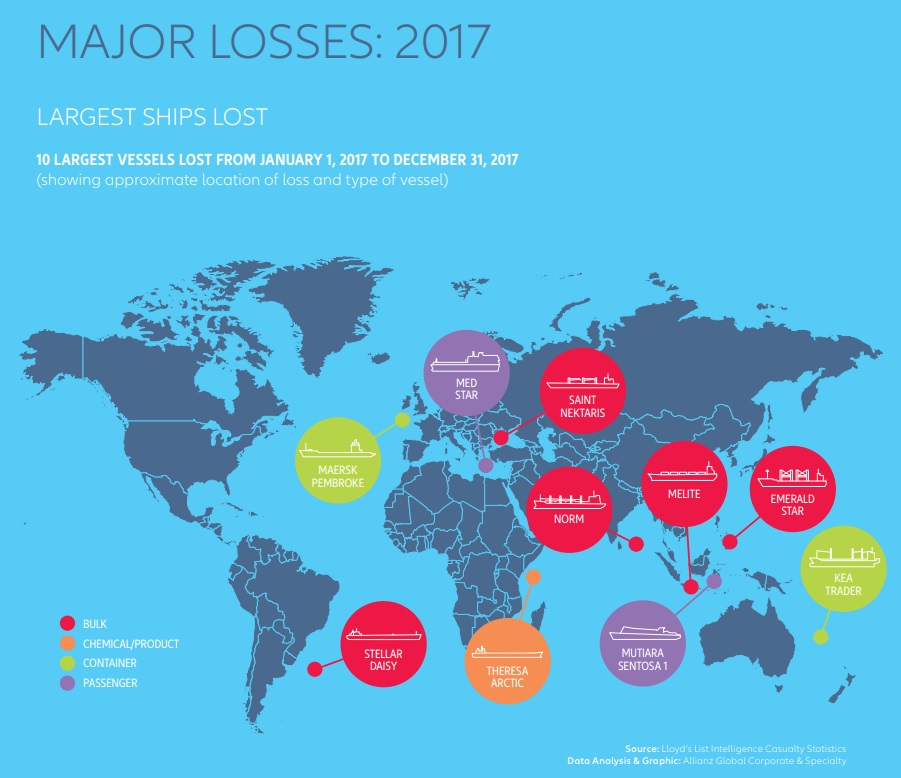 â€œCrews are under increasing pressure as shipping supply chains are streamlined for greater efficiency. While vessels once spent weeks in port, turn-around times for a cargo ship are now measured in days; such tight schedules can have a detrimental effect on safety culture and decision-making,â€ stated Andrew Kinsey, Sr. Marine Risk Consultant, AGCS. â€œThere is always the need to strike the right balance between safety and commercial pressures. We need to look at behavior modification and how to get personnel to move away from normalizing risk.â€

Moving forward, better use of data and analytics could help as the shipping industry produces a significant amount of data, but could utilize it better to produce real-time findings and alerts. New insights from crew behavior and near-misses can identify trends as predictive analysis may be the difference between a safe voyage and a disaster. 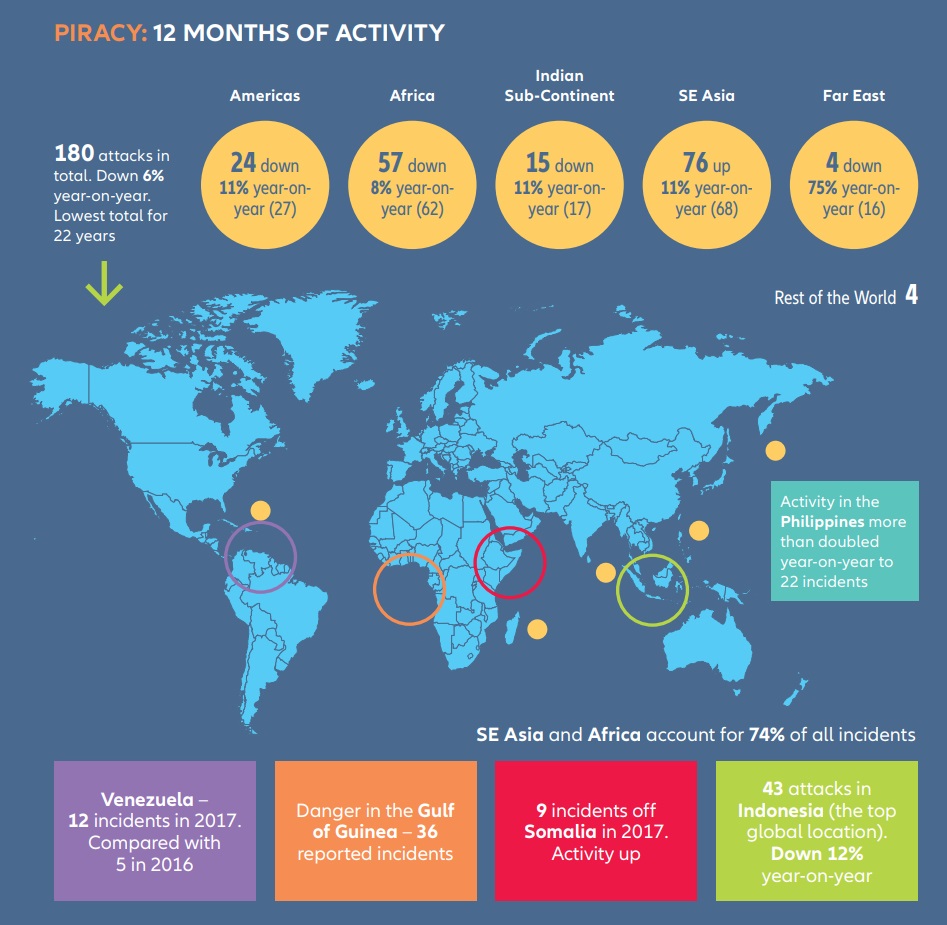 Despitehuge improvements in maritime safety,Â fatal accidents at sea persist. Human error continues to be a major driver of incidents and captains and crews are under increasing commercial pressure as supply chains are streamlined. Tight schedules can have a detrimental effect on safety culture and decision-making leading to theâ€œnormalization of riskâ€. Better use of data and analytics can help to address this. The shipping industry has learned from losses in the past but predictive analysis is important for the future. New insights from crew behavior and near-misses can help identify human error trends. Sensor technology can also enhance risk management. For example, hull stress monitoring sensors could be linked to ship navigation in bad weather, feeding real-time information on structural integrity. However, over-reliance on technology on board must be avoided. Continual training is imperative to ensure the right balance is achieved between technology and human intervention.

Major fires oncontainer vessels are one of the mostÂ significant safety issues. The blaze onÂ the ultra-large container ship (ULCS)Â Maersk HonamÂ in March 2018 is oneÂ of a number of incidents in recentÂ years. Issues driving container ship fire exposures include the adequacy of firefighting capabilities as vessels become larger, misdeclaration of cargo, salvage challenges and time taken to access a port of refuge. ULCS provide economies of scale but the industry needs to ensure risk management standards are up to speed, as larger container ships are on their way.

Hurricanes Harvey, Irma andÂ Maria (HIM) and other severe weatherÂ events in 2017, such as TyphoonsÂ Damrey and Hato, show traditionalÂ maritime risks should not be overlooked.Â AGCS analysis shows bad weather directly contributed to at leastÂ 21Â total losses in 2017 and this could yet increase furtherÂ (see page 9). Fuel market, cargo, cruise ship and port operations were also disrupted, leading to natural catastrophes being ranked the top risk by shipping experts in theÂ Allianz Risk Barometer 2018. Shippers need to consider scenarios where multiple locations are impacted when drawing up contingency plans.

Shippers get serious about cyber threat as penalties increase

Cyber incidents like the global NotPetya malware event have served as a wake-up call for the shipping sector. Many operators previously thought themselves isolated from this threat.Â  At the same time, new European Union laws such as the Network and Information Security Directive (NIS), which requires large ports and maritime transport services to report any cyber incidents and brings financial penalties, will exacerbate the fall-out from any future failure â€“ malicious or accidental.

Other key risk topics include:

Autonomous shipping and drones:Â  Legal, safety and cyber security issues are likely to limit widespread growth of crewless ships, for now. Human error risk will still be present in decision-making algorithms and onshore monitoring bases. Drones and submersibles, however, have the potential to make a significant contribution to shipping safety and risk management. Future use could include pollution assessment, cargo tank inspections, monitoring pirates and assessment of the condition of a shipâ€™s hull in a grounding incident.

Climate change:Â Climate change is impacting ice hazards for shipping, freeing up new trade routes in some areas, while increasing the risk of ice in others â€“ over 1,000 icebergs drifted into North Atlantic shipping lanes last year, creating potential collision hazards. Cargo volumes on the Northern Sea Route reached a record high in 2017.

Emission Levels:Â Estimates suggest that the shipping sectorâ€™s emissions levels are as high as Germanyâ€™s, prompting a recent pledge to reduce all emissions by 50% in the long-term, alongside existing commitments to reduce sulphur oxide emissions by 2020. As the industry looks to technical solutions to achieve these aims, there could be accompanying risk issues with engines and bunkering of biofuels, as well as operator training.

For more details, in depth analysis and more infographics, click on below image to download full report 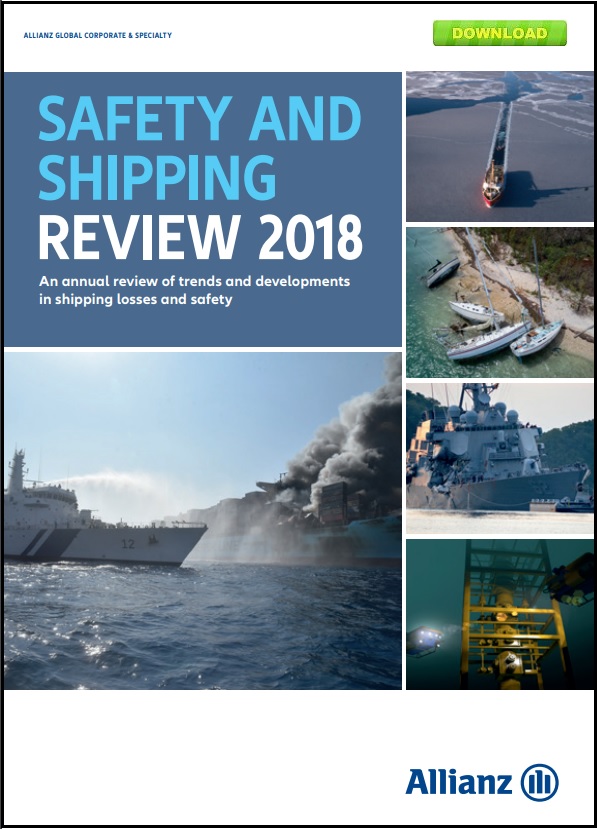