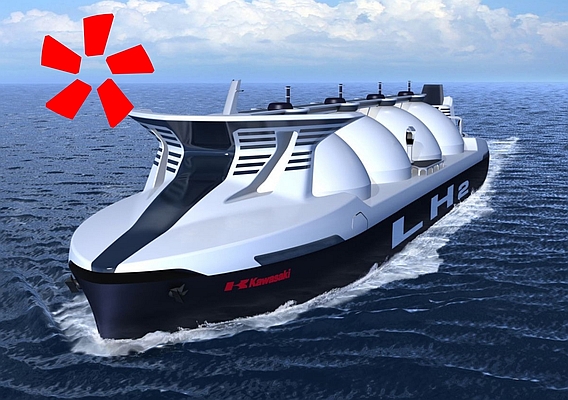 (www.MaritimeCyprus.com) Liquid hydrogen is heir to many of LNG’s issues as well as some of its technology, including the same old ‘chicken-and-egg’ problem of development versus demand. Some, however, are preparing to jump the pitfalls that hampered its forerunner.

Therefore, while ultra-clean renewables production of hydrogen will take some time to pick up, the HySTRA project is engaged in creating a complete CO2-free hydrogen supply chain. It’s part of the Japanese government’s vision of a ‘hydrogen society’ and should kick-start commercialisation (as well as giving Japanese tech a much needed boost), even if this doesn’t originate with the cleanest of sources: brown coal.

That’s pretty mucky stuff. However, J-Power believe they have a handle on taking it from mines in Victoria, Australia, and splitting it cleanly, capturing the carbon (which would, if released, decimate any green credentials) and liquefying the hydrogen, ready for shipping out to Japan’s nascent H2 industry.

Long range transport is pivotal: therefore a new LH2 carrier is being designed by KHI’s Hydrogen Project Development Centre in collaboration with Shell Japan. It’s worth knowing that KHI has long experience in not just shipping LNG but in cryogenics, developing Japan’s  first hydrogen liquefaction plant and LH2 tanks for the JAXA Tanegashima Space Centre.

The naval architecture echoes its LNG predecessors: the 8,000 gt vesselis based on similar, small-scale LNG carriers.It is around 110m long, 20m beam with 11m depth and the diesel-electric drive will give it a 13kn transit speed for the 40-day journeys, with cargo machinery and engine rooms located forward.

However, the star of the show on this demonstration ship is a 1,250m³ horizontal, cylindrical C-type tank, which, for later builds will bepaired with another, giving 2,500m³ cargo capacity.This is a pressure vessel made from austenitic stainless steel, complete with multilayer insulation that helps keep the hydrogen at -253°C. Notably, the shell’s outer structure needs to be gas tight to keep out an air that would simply freeze between layers.

Still, metal shrinkage is inevitable,0.3% for LH2 temperatures, so the tank has been designed to allow its inner shell to contract freely around the centre-line. While this inner container requires support, the extreme nature of the cold requires mitigating any potential thermal bridges. Therefore the pillars, arranged between the cylinders at the fore and aft saddle positions, are not high-grade steel but are rather of aGFRP construction that will minimise heat ingress: for similar reasons all the penetrating pipes are housed in a cancellable vacuum dome which also holds an inspection hatch.

As pressures change over the journey’s duration it’s being fitted with KHI’s VIPDM (Vacuum Insulation Performance Deterioration Monitoring) system which projects expected pressure and notes deterioration rates in chronological order: the alarm will sound if a resulting threshold value is unexpectedly exceeded.

The loading has its similarities to other refrigerated cargo; spray lines with a gas return will cool the tank to minimise thermal stresses and excessive pressure, and the spray will also be used to lowering the temperature in the void space during the journey.

While the ship will also have a boil-off gas (BOG) management system this first pilot vessel will not use it for propulsion, although IGF code updates permitting, exploiting the boil-off for fuel seems a possibility for future designs, once more following the pattern set by LNG vessels with carriers being followed by other types of commercial shipping.

If that’s the case, then there is one other, potentially interesting element: a newly designed, highly insulated loading arm has also been developed by KHI, which it says “could be adapted for bunkering purposes” adding that “achieving a practicalperformance will support a bunkering service application”.

So, it seems that KHI is looking at a much broader future for their liquid hydrogen offering, and at some point, H2-propelled vessels might well be filling up from KHI-built facilities.

While this is still a pilot project, according to KHI “few barriers will remain after the success of the demonstration”.