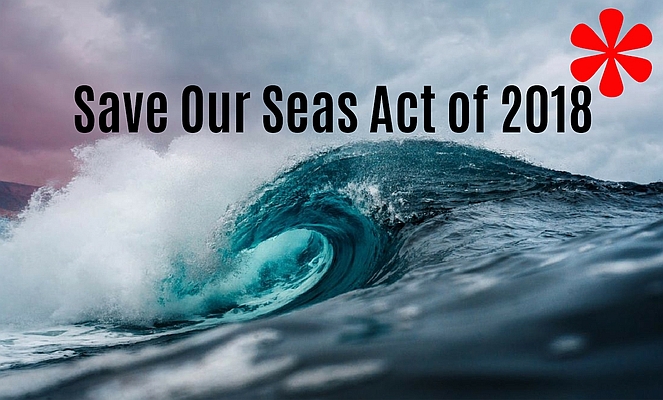 (www.MaritimeCyprus.com) President Donald Trump signed something that’s good for the ocean. It’s called The Save Our Seas Act, and it puts funding in place for the National Oceanic and Atmospheric Administration’s Marine Debris Program. The program works to reduce debris through research, prevention and reduction. The Save our Seas legislation keeps the program going by continuing to authorize $10 million per year for the next five years.

President Trump said the Save Our Seas Act will help to address the problem by extending the NOAA Marine Debris Program for five additional years and authorizing the National Oceanic and Atmospheric Administration to declare severe marine debris events. The law will release funds to states for cleanup and for response efforts. "And we will be responding and very strongly," said Trump, adding that the law encourages the executive branch to engage with nations responsible for dumping garbage into the oceans.

The bill also calls on the State Department to get international cooperation for clean-up efforts. According to the Ocean Conservancy, more than half of the estimated eight million metric tons of plastic littering the world's oceans come from a handful of developing countries in southeast Asia.

Trump called out China and Japan as being two of the countries that are responsible for large amounts of debris in the oceans.

"It's incredible when you look at it," Trump said. "People don't realize it, but all the time we're being inundated by debris from other countries."

"By reauthorizing the NOAA'S marine debris program, the law supports research on and solutions to this growing problem. By urging the State Department to engage their counterparts around the world, [it] recognizes the global nature of marine debris, which spares no country or coastline," he said. "We are grateful for the bipartisan effort here -- another reminder that our ocean is for everyone to enjoy and care for."