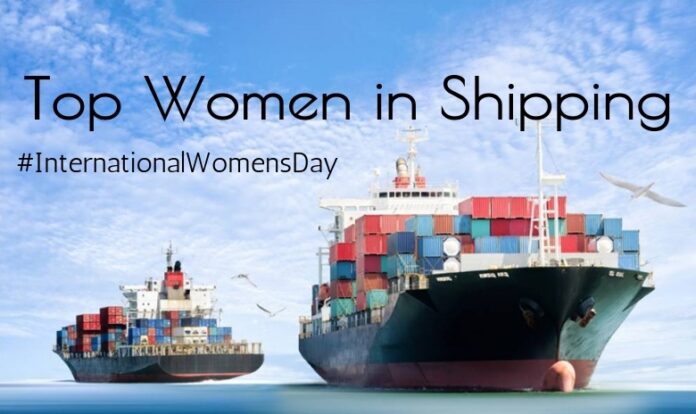 (www.MaritimeCyprus.com) From finance and insurance to politics, dry bulk and oil, women are increasingly making their mark in an historically male-dominated shipping industry. We look at the impressive outcomes achieved by just 10 of these incredible women.

FOR someone who spearheads pivotal loans as chief executive of the Export-Import Bank of China (Cexim), Hu Xiaolian deliberately avoids the spotlight. The Chinese policy bank had a $17bn portfolio at the end of 2017. This year, Navigation Maritime Bulgare ordered six 45,000 dwt dry bulkers in a $94m financing agreement with Cexim. Ms Hu graduated from the School of People’s Bank of China with an MA in economics. Previous to her current position, she worked as director of the State Administration of Foreign Exchange.

FOLLOWING in her father’s footsteps down the maritime route, Angeliki Frangou became chief executive of Navios Group. After a stint on Wall Street, she raised $200m to buy Navios and bought her first ship, Fulvia. This year, Navios Maritime Holdings revealed a revenue of $390.4m for the previous nine months, with the third quarter 2018 contributing $141.5m. The Navios fleet size stands at 70 vessels, of which 36 are owned. Moody’s have bumped the company's rating up from B3 to B2 due to better charter rates and a strengthening dry bulk market. Ms Frangou has stated Navios' position on the hot topic of scrubbers, claiming it would install scrubbers if it is paid, yet remain “agnostic” on the subject generally. She has a degree in mechanical engineering from Fairleigh Dickinson University and a master’s degree in mechanical engineering from Columbia University, which has granted her expertise knowledge about her vessels. Ms Frangou is renowned as a charismatic character, with an interest in the opera and antique art.

As EU transport commissioner, Violeta Bulc has been centre-stage this year due to the European Commission’s role in the future of shipping regulatory emissions, specifically monitoring and verification. The commission will be prioritising projects on CO2 emissions, fuel consumption and scrapping to ensure compliance in the industry. Ms Bulc and her colleague Miguel Arias Cañete supported the International Maritime Organization's commitment to improve carbon performance by 40% in 2030. They hold the difficult position of gaining consensus for multiple parties and acting as a mediator to ensure the unified outcome of decarbonisation. Ms Bulc has experience across transport, telecommunications and politics, with her previous position of deputy prime minister responsible for strategic projects and cohesion for the government of Slovenia. She holds a computer science and informatics degree from the University of Ljubljana, Slovenia, as well as a Master’s in information technology at Golden Gate University.

DURING her five years with DNB, Kristin Holth has spent more than a year as global head of ocean industries, slogging away in the demanding ship finance sector. With international experience in London, New York and Norway, Ms Holth has had vast exposure across the maritime financial sector. Despite a plummet in profits for the 2017 year-end, where the figure was equivalent to $2,32100, DNB revealed a third-quarter 2018 profit of $629,103, demonstrating a $16,157 increase on the corresponding quarter from 2017. Earlier in the year, DNB chose to move shipping and oil customer loans into a separate unit. Ms Holth described shipping and onshore as “capital-intensive and demanding”. Ms Holth studied international finance and received an MSc in business at the Norwegian School of Management.

BIRGITTE Vartdal plays a crucial role in the renowned dry bulk company Golden Ocean, owned by John Fredriksen. Being appointed as chief executive is challenging in this turbulent time, both economically and environmentally, yet success is indicated through 2018 profits increasing to $35m as freight rates recover. Golden Ocean demonstrated its compliance with the IMO's low-sulphur regulations by announcing a retrofit of 20 capesizes with scrubber installations. It has 77 vessels in its fleet. Ms Vartdal has previously stated her reasons for joining the maritime industry were due to its global significance and opportunities. She encourages women to “say yes” when opportunities present themselves. She has a degree in physics and mathematics from the Norwegian University of Science and Technology, and an MSc in financial mathematics from Heriot-Watt University, Scotland.

THIS February, Carol Howle became chief executive of BP Shipping in London. She manages the group’s business across upstream, downstream, integrated supply and alternative energy. Mrs Howle has been faced with a fleet renewal programme, as well as environmental regulations having a significant impact on demand for fuels. Third-quarter results displayed promising profits at $3.8bn due to projects delivered. She often speaks about career confidence for women at various maritime events. BP Shipping recently signed the Women in Maritime gender equality charter, alongside 40 other UK companies.

AS digital leader at AXA XL, Hélène Stanway has a core mission to identify emerging technologies that solve business problems. Ms Stanway is an advocate of how Artificial Intelligence, the Internet of Things and blockchain can improve the insurance industry and says technology can provide faster analysis than humans. She is described by a colleague as “on the constant watch for new trends and concepts” that facilitate new digital opportunities. Ms Stanway studied management science and French at Keele University, before attending the Chartered Insurance Institute.

SINCE 2007, Helle Hammer has headed up Cefor, the Marine Insurance Industry Association based in Norway. She has also represented the DNV Council, was part of Bureau Veritas’ stakeholder committees, Registro Italiano Navale and DNV GL in forums, and is a board member of the Norwegian Maritime Forum. Ms Hammer works as a political advisor for Norway’s main centre-right party (Høyre) and she chairs the political forum of the International Union of Marine Insurance. Cefor completes statistical analysis to release trends and reports to the market on claims, insured values and premiums. In 2018, it found frequency of total losses is at its lowest level since 1996 and hull claim trends remain at a low level. When Ms Hammer is not juggling politics and insurance, she enjoys skiing and golf.

AS THE maritime industry is experiencing a paradigm shift in social change and attitudes towards diversity, Despina Theodosiou is right in the epicentre, driving these changes. As Tototheo Maritime joint chief executive and recent president for Women’s International Shipping and Trade Association (Wista), Ms Theodosiou has had a hectic year, pushing initiatives and vocalising diversity issues at conferences. This year, Wista was granted IMO consultative status and has increased membership of both individuals and associations. Ms Theodosiou strives to utilise more of the female talent pool in shipping to increase equal opportunities throughout shipping, creating a more inclusive industry.

JLT Specialty is merging with Marsh in a $5.5bn deal to create a leading commercial brokerage, Marsh-JLT Specialty. After 16 years with the company, Lucy Clarke, global chief executive since April, is now responsible for a variety of sectors including marine. JLT Specialty saw increased revenue of 3% to £713.5m ($915.5m) after the first six months of 2018, yet profits decreased 9% accordingly, due to the Global Transformation Programme. This programme is expected to deliver benefits of £40m by 2020. In April, there was a restructure dividing the group into three entities; reinsurance, specialty and employee benefits. Ms Clarke has 25 years’ experience within insurance, across multiple roles. She attended Vanderbilt University and obtained a BA in English and economics.