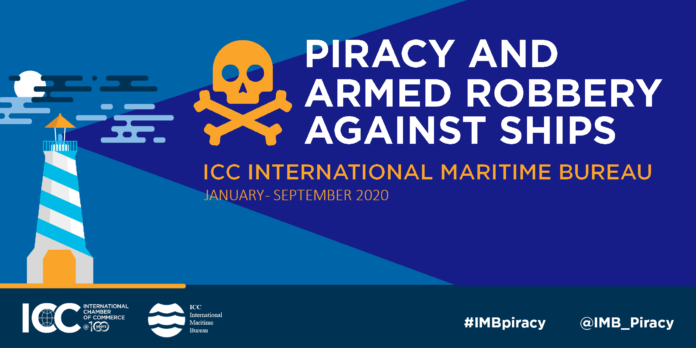 (www.MaritimeCyprus.com) ICC International Maritime Bureau (IMB) figures show a rise in piracy and armed robbery on the world’s seas in the first nine months of 2020, with a 40% increase in the number of kidnappings reported in the Gulf of Guinea, compared with the same period in 2019. Pirates armed with guns and knives are abducting bigger groups of seafarers at further distances off the West African coast.

IMB’s latest global piracy report details 132 attacks since the start of 2020, up from 119 incidents in the same period last year. Of the 85 seafarers kidnapped from their vessels and held for ransom, 80 were taken in the Gulf of Guinea – in 14 attacks reported off Nigeria, Benin, Gabon, Equatorial Guinea and Ghana.

In the first nine months of 2020, seafarers reported 134 cases of assault, injury and threats, including 85 crewmembers being kidnapped and 31 held hostage onboard their ships. A total of 112 vessels were boarded and six were fired upon, while 12 reported attempted attacks. Two fishing vessels were hijacked, both in the Gulf of Guinea. 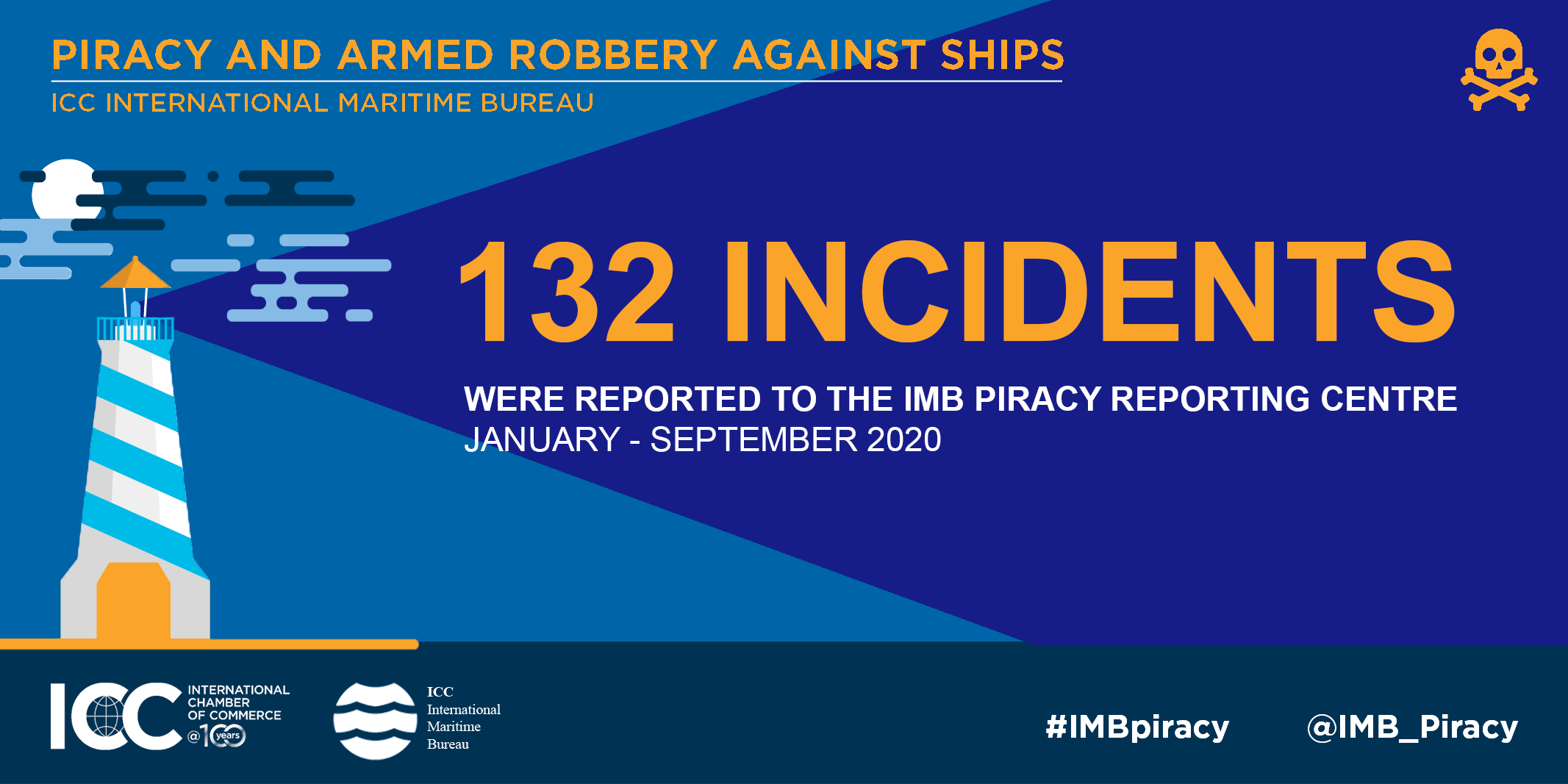 “Crews are facing exceptional pressures due to Covid-19, and the risk of violent piracy or armed robbery is an extra stress,” said Michael Howlett, Director of IMB, whose Piracy Reporting Centre (IMB PRC) has responded to reports and shared data since 1991, supporting seafarers and fishers worldwide. “While IMB liaises with authorities swiftly in case of a pirate attack, we encourage all Coastal states and Regional Cooperations to take responsibility for ensuring maritime security within their EEZ to achieve safer seas and secure trade.” 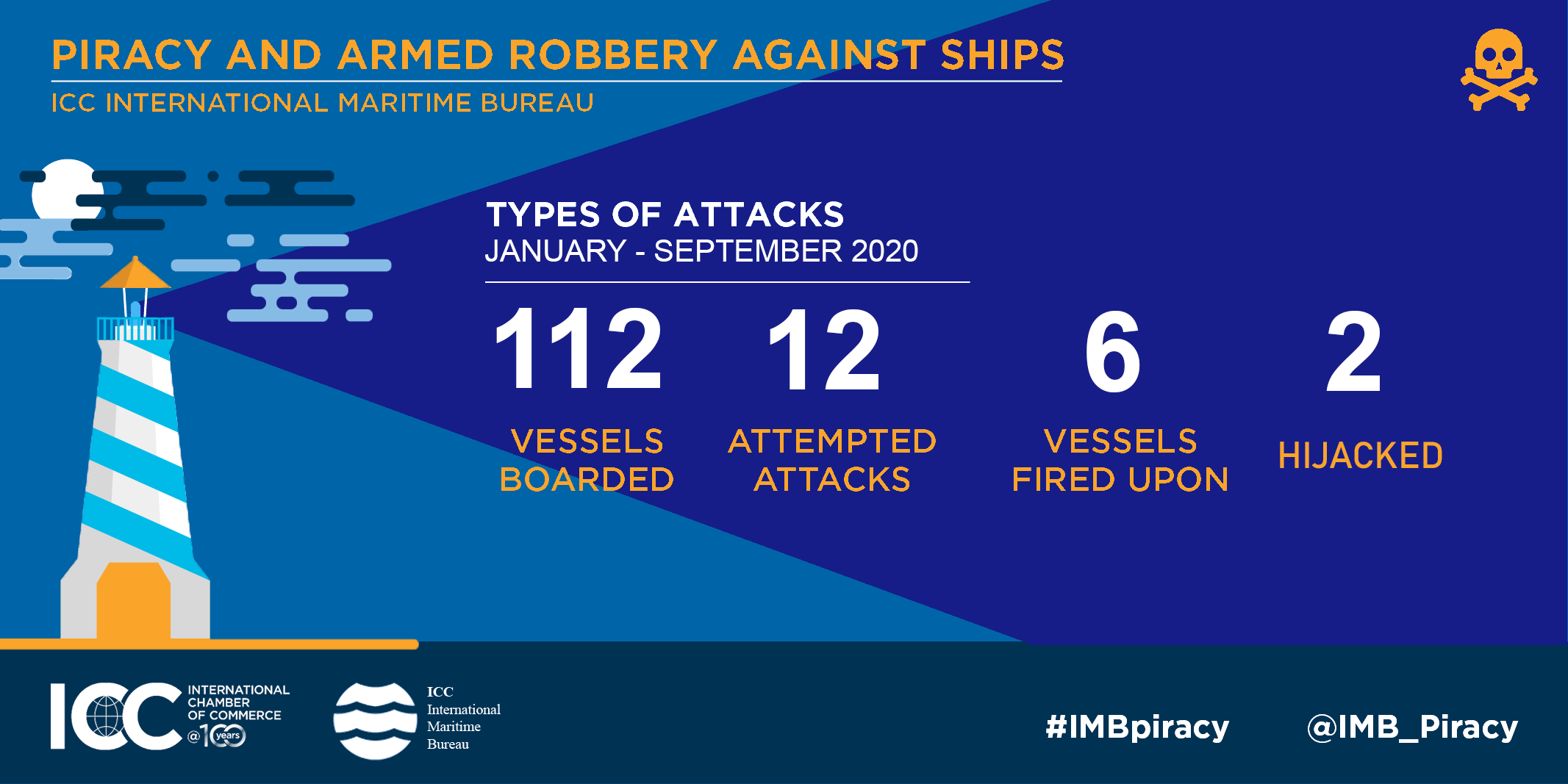 With approximately 95% of global kidnappings reported from within Gulf of Guinea waters, IMB warns that pirate gangs in the area are “well organized and targeting all vessel types over a wide range”.

The furthest attack from shore also involved the most crew kidnapped from a single vessel in 2020. On 17 July 2020, eight pirates armed with machine guns boarded a product tanker underway around 196 nautical miles southwest of Bayelsa, Nigeria. They held all 19 crewmembers hostage, stole ship’s documents and valuable items, and escaped with 13 kidnapped crew. The tanker was left drifting with limited and unqualified navigational and engine crew onboard. A nearby merchant vessel later helped the tanker to sail to a safe port. 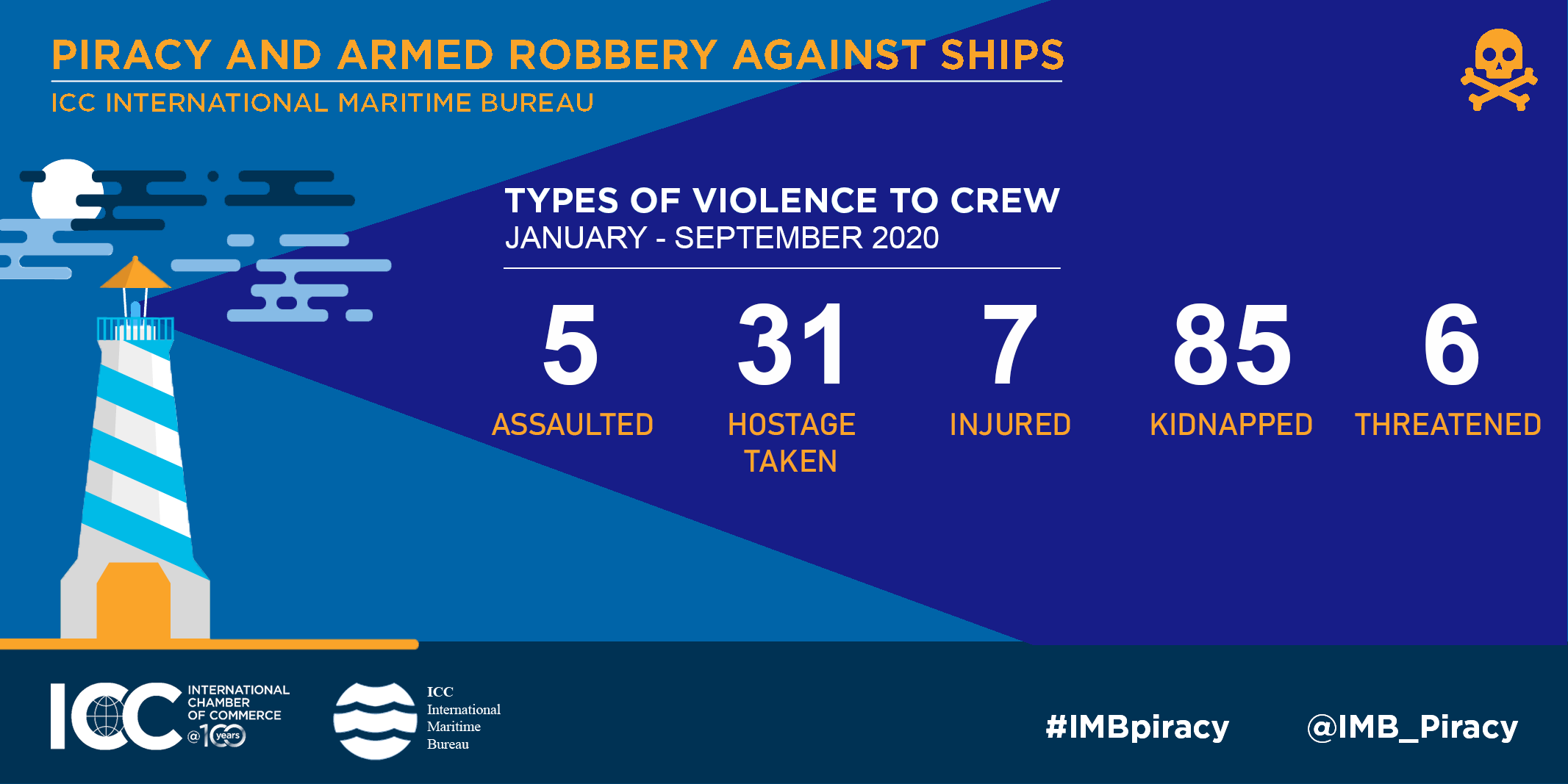 Regional Authorities were notified and the 13 kidnapped crewmembers were released safely one month later.

A more recent example was on 8 September 2020, when armed pirates attacked a refrigerated cargo ship underway around 33nm south-southwest of Lagos, Nigeria. Two crewmembers were kidnapped, but the rest of the crew managed to retreat into the citadel – one of the industry’s recommended best practices endorsed by IMB. A Nigerian naval team was dispatched, who boarded, conducted a search, and then escorted the ship to a safe anchorage for investigations.

The IMB piracy report includes a special thanks to the Nigerian Authorities, particularly the Nigerian Navy and Nigerian Maritime Administration and Safety Agency NIMASA who “continue to provide timely information, actions and valuable cooperation between Agencies”. 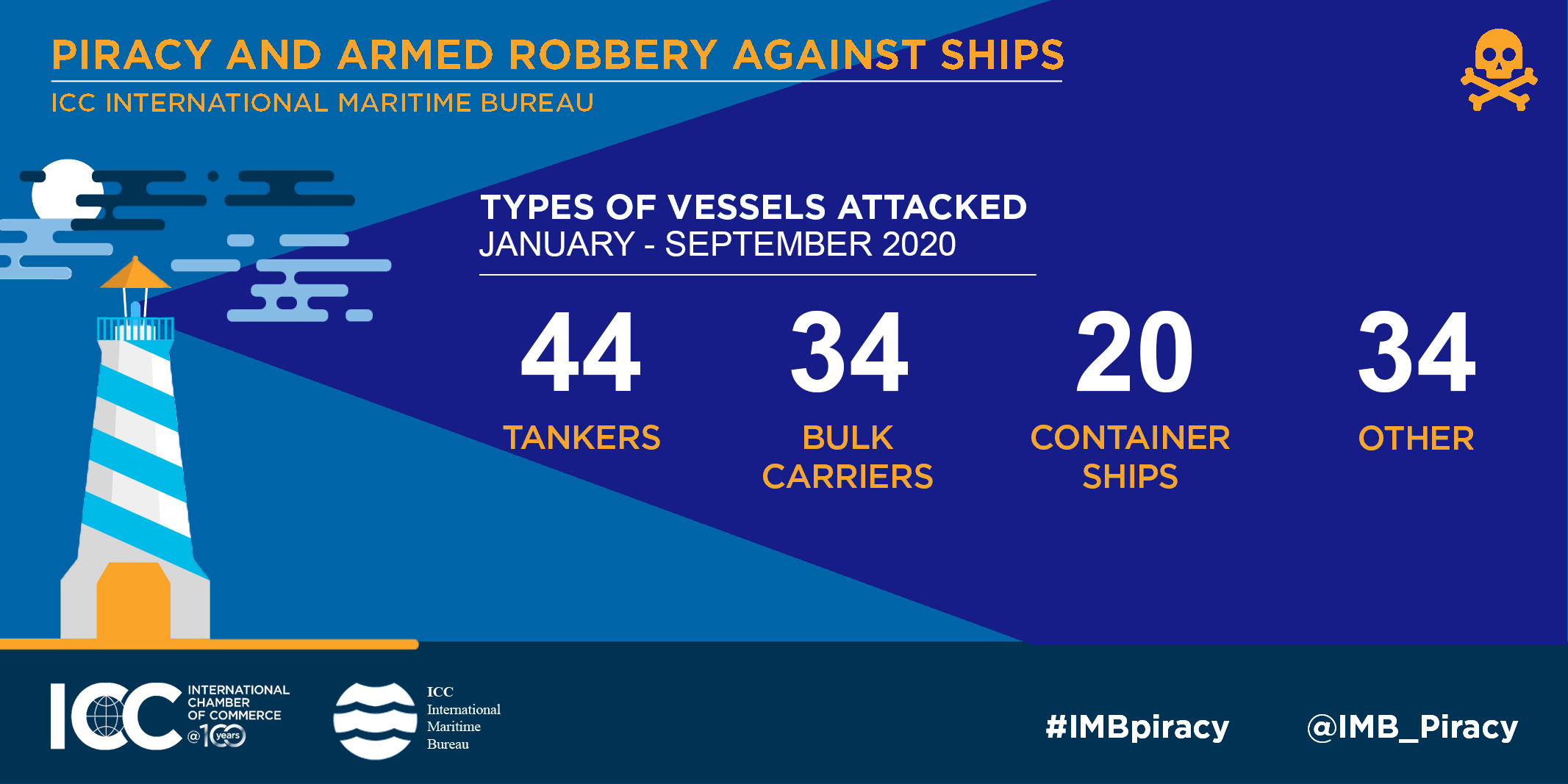 The piracy centre recorded 15 attacks to ships underway in the Singapore Straits. While most are considered low-level crimes, two crew were threatened, one injured and another taken hostage, indicating a continued risk to the crew. Knives were reported in at least ten of the incidents.

There has been a sharp quarterly decrease in the number of incidents within the Indonesian archipelagic, with four reported in Q3, down from 14 in Q2. These are viewed as low-level opportunistic thefts with most reported on anchored vessels. 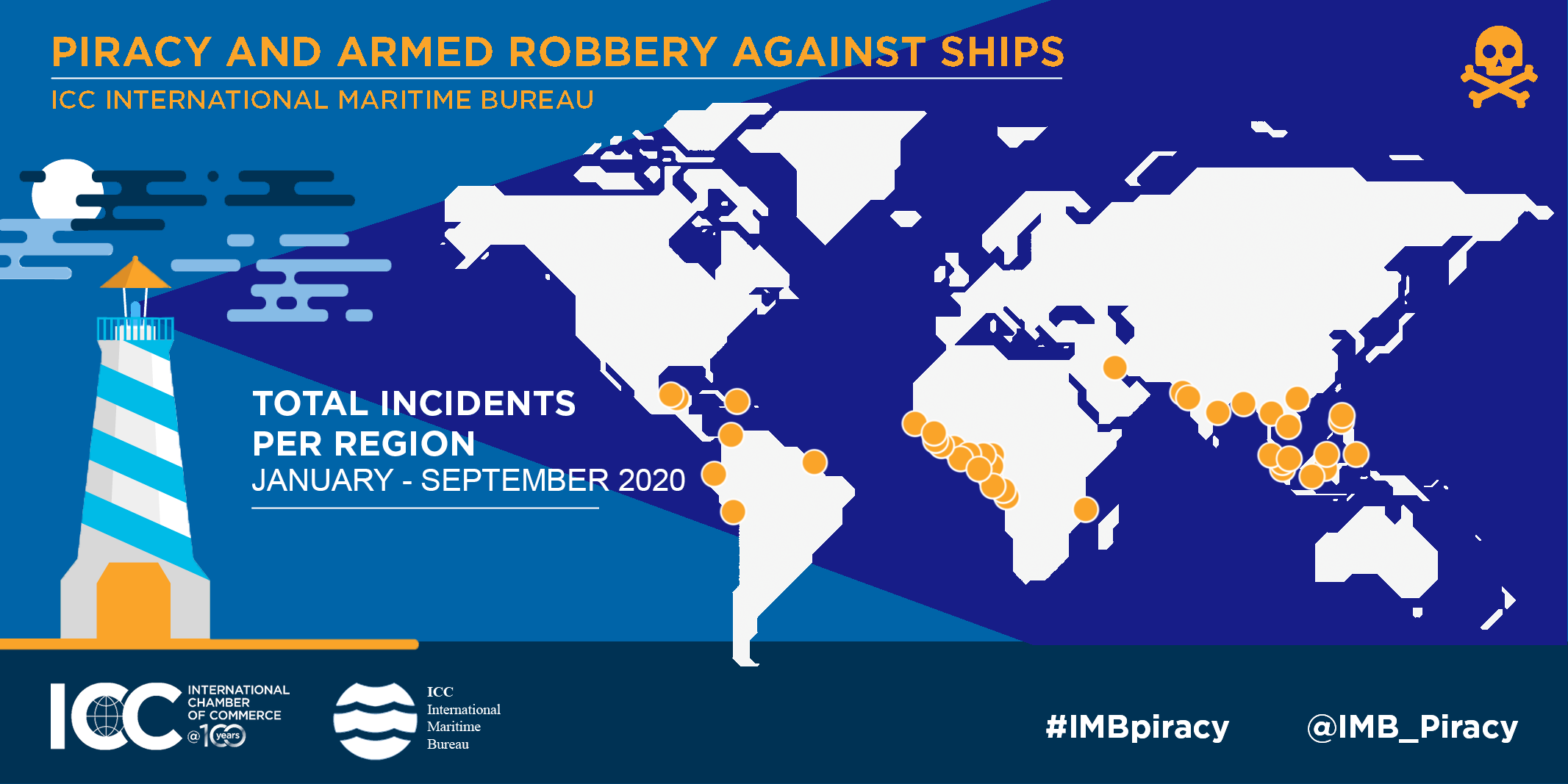 All vessel types in the Caribbean, Central and South America – including Brazil, Colombia, Ecuador, Haiti, Mexico and Peru are being targeted at anchor as well as underway, and during river passages under pilotage. On 26 September 2020, a container vessel was boarded by armed perpetrators during its river passage at Guayaquil. The attackers fired their weapons towards the accommodation and bridge, then opened containers and stole the contents before leaving.

However, as many more cases go unreported, IMB is urging all shipmasters and operators to inform, in a timely manner, the 24-hour IMB Piracy Reporting Centre of any attacks to their vessels or crew.

Howlett said the IMB PRC has always believed in the power of sharing and exchanging information: “Understanding the true risk in the area is an important step towards improving safety for all seafarers. IMB PRC not only relays reports to appropriate response agencies and broadcasts incident information to ships via GMDSS, but we also use the reported statistics to raise awareness of these crimes and be a catalyst of change.”

No incidents of piracy have been reported around Somalia since 2018. In August 2020, pirates freed the last three of the thousands of hostages who have been held captive in the region over the years since ship hijackings peaked in 2011.

Despite this, as Somali pirates are still capable of carrying out further attacks, IMB urges vessels to continue implementing the industry’s best management practices (BMP5), and encourages the continued, stabilizing presence of navies in the region. 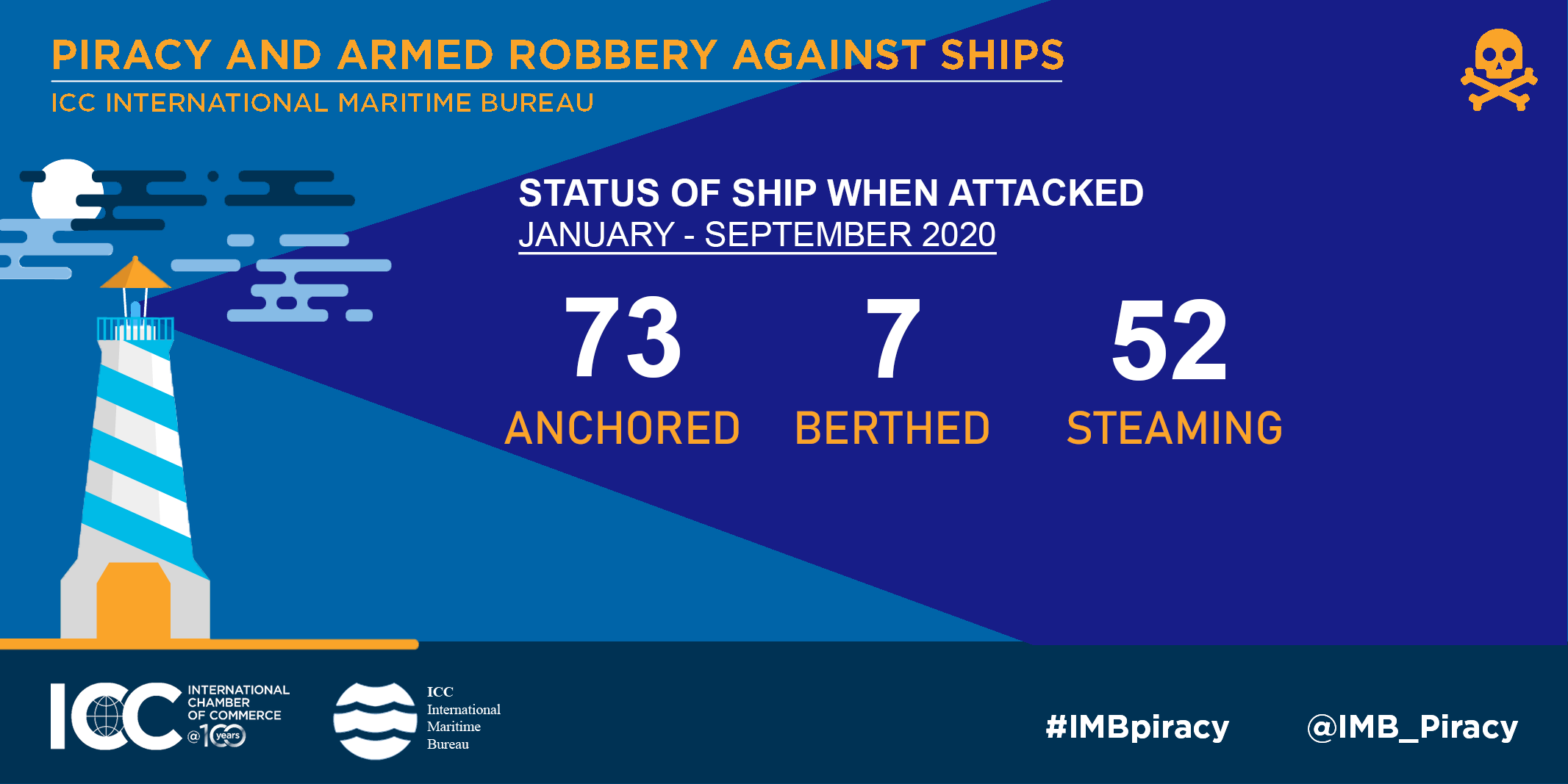