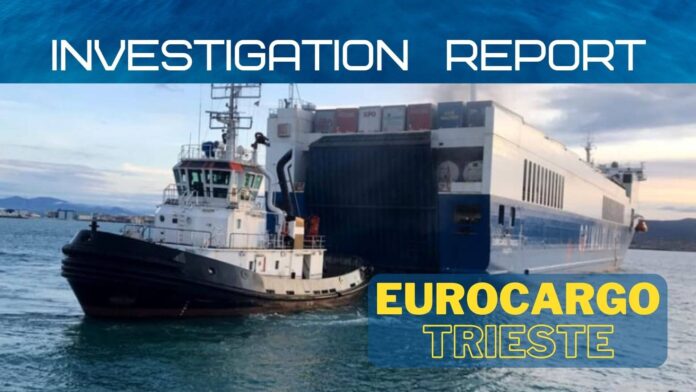 (www.MaritimeCyprus.com) Fire broke out in the engine room of the Maltese Flag vessel M/V Eurocargo Trieste early on November 21st 2019 when she was about three miles off Livorno, Italy.

There were 25 crew members and 278 vehicles on board, but no passengers. The ferry was immediately brought closer to the coast. The fire was extinguished with internal fire equipment. A team of the fire brigade went on board to check the situation. Tugs took the ship in tow and cooled down the bulkheads with water cannons.

No injuries have been reported among the 25-member crew. Eurocargo Trieste was later towed to Livorno, where it has since been berthed to allow accident investigators to inspect the damage caused by the blaze.

Eurocargo Trieste was built in 1997 at Fincantieri on behalf of leading Spanish shipowners. It was purchased in 2015 by the Malta Motorways of the Sea Ltd company and at the time of the Fire was chartered by Grimaldi Euromed SpA.

The ship was registered in Malta and was managed at that time under the technical-operational profile of the Greek ship management company, Valiant Shipping.

At around 0123 hrs on 21 November 2019, ro-ro cargo, motor vessel Eurocargo Trieste Livorno, Italy, for Savona, Italy. There were 25 crew members on board and the vessel was laden with trailers.

At around 0220, shortly after dropping off the outbound pilot, a fire broke out around the starboard main engine. The engine-room crew initially tried to fight the fire but soon had to vacate the space. The crew members were then mustered, and the firefighting team tried to enter the engine-room to fight the fire. Due to thick smoke and difficulties entering the space, the fire-fighting team retreated, and the master decided to flood the engine-room with CO2. The gas was released at 0230.

The vessel contacted Livornoâ€™s port authorities at 0240 requesting fire-fighting assistance. At 0304, the first pilot boarded the vessel and at 0320, a tugboat started the deck boundary cooling. The Livorno Fire Department personnel boarded the vessel at 0410 and at around 1200, the fire-fighters reported that the fire was under control. However, the vessel lost all power and was subsequently re-berthed at 1720, with the assistance of tugs.
None of the crew members were injured and no pollution occurred, but the vesselâ€™s engine-room sustained heavy damage.

The safety investigation concluded that the fire was most likely caused by fuel spilling accidentally onto a hot surface, near the entrance to the purifier room. Once the fire started, it spread quickly due to the presence of combustible material, leaking heavy fuel oil and lubricating oil around the engine and its bilges.