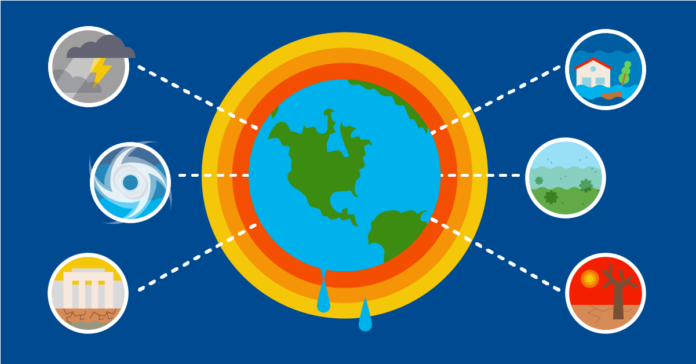 (www.MaritimeCyprus.com) While politicians and laypeople debate whether global warming is real, the effects of climate change continue to steadily creep into every ecosystem on the planet—and that has major consequences for life as we know it.

One of the most concrete ways to grasp the impact of climate change is to understand how global warming affects water around the world. As you’ll see, global warming’s effects are intersectional. The impacts of climate change on water, for example, have repercussions for agriculture, drinking water, weather, power supplies, wildlife, and more. Thus, examining climate change through the lens of water helps shed light on its far-reaching effects.

We’ll be honest: Learning about climate change can be disheartening. But it’s important not to let the following information lead to disempowerment. Instead, consider this information a call to action on behalf of our water and our planet.

Here are just some of the ways global warming affects water around the world.

As these terms imply, it’s likely that precipitation patterns will consist of prolonged periods of dryness punctuated by brief, intense periods of precipitation that may provoke flooding. The risk of flooding is higher if it’s preceded by drought.

Climate change may cause more droughts because rising air temperatures lead to higher rates of evaporation and plant transpiration, thereby speeding up water loss from the soil and plants. This process may help account for the California droughts of 2011 and 2017 and the 2012 to 2013 drought that impacted much of North America.

Extreme precipitation events can bring devastating consequences in the form of ecological harm, property damage and loss, massive financial costs, and even death of people and animals. A recent study by The National Oceanic and Atmospheric Administration (NOAA) discovered that since 1980, many of the most economically disastrous weather- and climate-related disasters were related to water. For instance, tropical cyclones, droughts, severe storms, and flooding have resulted in costs totaling roughly $927 billion, $247 billion, $232 billion, and $124 billion, respectively.

How do my hydration needs compare to yours?

The Chesapeake Bay Watershed on the United States’ mid-Atlantic coast is another living example of many of the impacts brought on by extreme weather events. Between 1958 and 2012, the northeastern U.S. reportedly experienced a more than 70 percent increase in the amount of rainfall measured during heavy precipitation events. This has led to flooding, an increase in pollution running off into the bay, and changes in the water’s salinity (which impacts the ability of aquatic animals and flora to survive).

Diminished water quality
Global warming can impair water quality in several ways, which can have significant consequences for people, wildlife, and ecosystems. Take, for instance, these situations.

The U.K. serves as an example of how climate change can impair water quality. Across this region, floods and droughts are on the rise. As noted above, flooding can negatively impact water quality in several ways, from increased pollution levels to more frequent or intense algal blooms.

Algal blooms
As noted above, algal blooms—or overgrowths of algae in bodies of water—can occur as a result of increased pollution in waterways (most notably pollution from nitrogen and phosphorous). A 2018 report from the Environmental Working Group (EWG) found that algal blooms are becoming more common and more intense, and that’s bad news for our waterways and our health.

Some of these blooms produce harmful toxins that may be fatal to people and animals. Even blooms that don’t produce toxins can be harmful to the environment and local economies in several ways.

Again, the Chesapeake Bay Watershed offers a case study: Rising temperatures in the summer have contributed to algal blooms that have created “dead zones” and resulted in the widespread die-off of fish, other marine life, and underwater grass beds—impacting both the ecosystem and the local economy.

Why does climate change provoke algal blooms? Scientists studying algal bloom growth across the U.S. suspect a number of factors including the following:

Fjords in Scandinavia represent what can happen when these climate-change-induced shifts affect waterways. Nutrient pollution that spurs the growth of potentially harmful bacteria impact waterways and make it harder for native aquatic species to survive. Protecting the fjords is of utmost importance, because research suggests fjords play a big role in absorbing carbon and reducing atmospheric levels of carbon dioxide (a major contributor to climate change).

Declines in drinking water
If you’ve read this far, then it probably comes as no surprise that climate change is diminishing both the quality and the quantity of drinking water. This may occur for a number of reasons including the following:

The glaciers in the Alps represent the direness of the situation. New research has found that unless climate change slows or halts, two-thirds of the ice in the Alps glaciers is expected to melt by the end of the century, with half of that ice melting by 2050. This melting is expected to have a massive impact on water availability for drinking, farming, generating electricity, and more.

Other extreme examples of the decline in available water can be found in southern Spain, which is expected to completely convert to desert by the end of the century unless climate change is halted, and in parts of Australia, where desertification is also increasing.

Disruptions to power supplies
Climate change not only directly impacts water supplies for humans, wildlife, and ecosystems, but it may also disrupt human power supplies, as evidenced by the following:

In a catch-22, power may become less available at a time when energy is more needed than ever to treat and distribute declining water supplies. All of this speaks to the immediate and pressing need to switch to renewable, less-resource-intensive energy sources.

Stronger hurricanes
Climate change has been linked to some of the strongest hurricanes to affect the U.S. in recent years. Research suggests these aren’t isolated incidents; instead, hurricanes and tropical cyclones are expected to get stronger if climate change escalates. This is true for multiple reasons including these.

Heat waves
Heat waves have already become more common across numerous regions throughout the world, and the top 20 warmest years on record have all occurred since 1995. Meanwhile, computer models predict that average temperatures around the globe will rise anywhere from 3.2 to 7.2 degrees Fahrenheit over the course of the 21st century. These heat waves exacerbate many of the water-related effects of climate change, including droughts, algal blooms, and rising sea levels.

While this list represents some of the most significant impacts of global warming on water, it is far from exhaustive. Climate change is also likely to impact water’s role in agriculture, ocean circulation, recreation, and many other areas.

It’s important to note, however, that all hope is not lost. Climate change can still be slowed by taking dramatic steps to reduce greenhouse gas emissions, such as transitioning to renewable energy sources or scaling back the industrial dairy and meat industries. We can all encourage these processes by urging local, state, and federal governments to invest in renewable energy and reducing our dairy and meat consumption. It’s not too late for each one of us to make a difference and help slow climate change’s impact on our precious water resources.