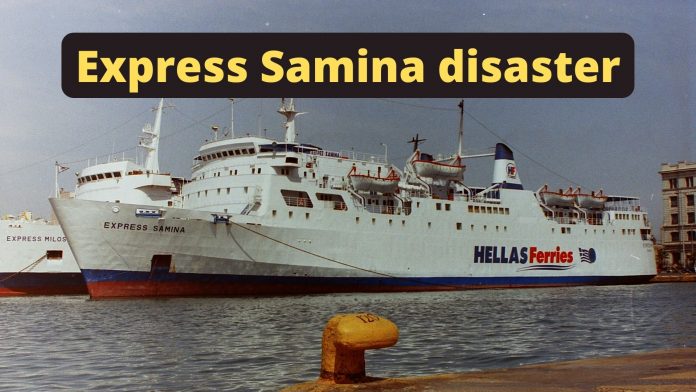 (www.MaritimeCyprus.com) On the evening of Tuesday 26 September 2000, MS Express Samina left the Port of Piraeus with 473 passengers and 61 crew members. At 22:12 local time, 2 nmi off the port of Parikia, at Paros island, the ship hit the reef of Portes islets at 18 knots. The wind at the time was 8 Beaufort. The ship sank close to the islets at 23:02, resulting in the deaths of 82 people from a total of 533 on board. The first responders to the distress call were fishing boats from the nearby port, followed by the port authorities and Royal Navy vessels, which were in the area carrying out a NATO exercise. The fact that some of the crew did not help the passengers evacuate the sinking ferry contributed to the death toll.

The crew had placed the ship on autopilot and there were no crew members on Bridge watch. Even with autopilot on, standard practice calls for one crew member (officer) to be on the bridge. The crew had deployed the fin stabilizers system to decrease the motions in bad weather; normally both stabilizer fins would deploy, but in this case the port stabilizer fin failed to extend, causing the ship to drift and therefore not travel in a straight line.

A crew member discovered the problem and tried to steer the ship to port, but this action occurred too late and at 22:12 local time, the ship struck the east face of the taller Portes pinnacle. The rocks tore a six-meter long and one-meter wide hole above the water line. After the impact, the rocks bent the stabilizer fin backwards, and the fin cut through the side of the hull, below the waterline and next to the engine room. The water from the three-meter gash destroyed the main generators and cut off electrical power. The water spread beyond the engine room, and the operators could not remotely shut the doors due to a lack of electrical power.

Professor David Molyneux, an expert in the performance of ships in harsh environments, said that the damage sustained by the MS Express Samina should not normally sink such a ship. The ship sank because nine of its eleven watertight compartment doors were open even though safety laws require ship operators to close and lock the safety doors. Molyneux described the open watertight doors as the most significant aspect of the sinking. This conclusion was supported by the "Investigation Into The Sinking Of The RO-RO Passenger Ferry Express Samina" by the National Technical University of Athens-Ship Design Laboratory submitted during the 8th International Conference on the Stability of Ships and Ocean Vehicles.

After a 12-month investigation, the appointed experts submitted their report to the authorities.  Specifically:

As a result of the sinking, ferries were retired after 30 years instead of 35, under Greece's new laws precipitated by the disaster. These laws were eventually relaxed due to the aging Greek fleet, but ships over 30 years old must comply with strict safety standards, and regular inspections are carried out by authorities. Additionally, this hastened the adoption of VDRs (voyage data recorders); all passenger ferries are now required by law to contain voyage recorders.
Pantelis Sfinias, 62, jumped from his sixth-floor office in the port of Piraeus, apparently unable to live with the knowledge that the business he created, Minoan Flying Dolphins, was blamed for one of Greece's worst sea disasters. Police said he died instantly. The semi-official Athens news agency reported that Mr Sfinias was discussing the Samina tragedy with the head of another ferry company when he suddenly opened the window and jumped.

Several crew members, as well as representatives for the owners, were subsequently charged with different criminal charges, including manslaughter and negligence.

First officer Tassos Psychoyios was sentenced to 19 years, while Captain Vassilis Giannakis received a 16-year sentence. Psychoyios had been watching a football match on television when the ship hit the rocks, according to witnesses. Three crew members were sentenced to between 15 months and 8 years 9 months for a series of misdemeanours that included abandoning ship without the captain's permission.