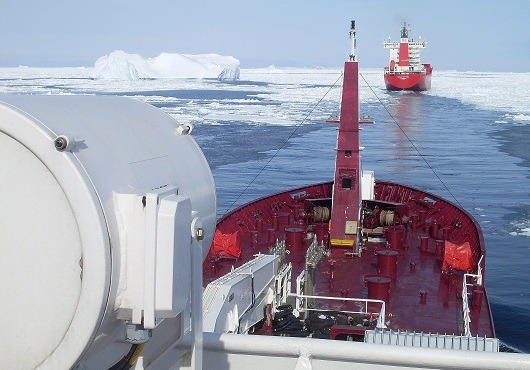 (www.MaritimeCyprus.com) A key step on the way to a mandatory Polar Code for ships operating in Arctic and Antarctic waters has been reached with the approval by the Marine Environment Protection Committee (MEPC) of the International Maritime Organization (IMO) of the environmental provisions in the draft International Code for Ships Operating in Polar Waters (the Polar Code), together with associated draft amendments to the International Convention for the Prevention of Pollution from Ships (MARPOL), to make the Code mandatory.

Following this approval, the MEPC will consider the Code and the draft amendments for adoption at its next session, in May 2015. Once adopted, the Polar Code and MARPOL amendments could enter into force on 1 January 2017.

The draft Polar Code covers the full range of design, construction, equipment, operational, training, search and rescue and environmental protection matters relevant to ships operating in waters surrounding the two poles. The environmental provisions add additional requirements to those already contained in MARPOL, to be applied to ships operating in the polar waters. As the Antarctic area is already established as a Special Area under MARPOL Annexes I and V, with stringent restrictions on discharges, the Polar Code aims to replicate many of those provisions in the Arctic area.

The MEPC approved the preamble, introduction and part II of the Polar Code, which includes mandatory provisions in chapters covering the following topics:

• prevention of pollution by oil, including discharge restrictions prohibiting any discharge into the sea of oil or oily mixtures from any ship, as well as structural requirements including protective location of fuel-oil and cargo tanks;

• prevention of pollution by sewage from ships, prohibiting the discharge of sewage except for comminuted and disinfected sewage under specific circumstances, including a specified distance from ice;

• prevention of pollution by garbage from ships, adding additional restrictions to the permitted discharges (under MARPOL Annex V, discharge of all garbage into the sea is prohibited, except as provided otherwise). Food wastes shall not be   discharged onto the ice and discharge into the sea of comminuted and ground food wastes is only permitted under specific circumstances including at a not less than 12 nautical miles from the nearest land, ice-shelf or fast ice. Only certain cargo residues, classified as not harmful to the marine environment, can be discharged.

Also approved were draft amendments to MARPOL Annexes I (prevention of pollution by oil from ships), II (noxious liquid substances), IV (sewage) and V (garbage) to bring the introduction and corresponding chapters in part II-A of the Polar Code into force under those annexes. Recommendations in Part II-B of the Polar Code were approved, including a recommendation to refrain from carrying heavy fuel oil as cargo or fuel in the Arctic (a current regulation in MARPOL Annex 1 already prohibits the carriage of such fuel in the Antarctic); and a recommendation to apply the standards contained in the International Convention for the Control and Management of Ships’ Ballast Water and Sediments (BWM Convention), 2004 (this instrument has not yet entered into force).

In May 2014, IMO’s Maritime Safety Committee (MSC), approved the Introduction and part I (safety provisions) of the Polar Code, along with a draft new chapter XIV of the International Convention for the Safety of Life at Sea (SOLAS) on “Safety measures for ships operating in polar waters”. The MSC will consider the adoption of the Polar Code and SOLAS amendments at its next session (MSC 94, 17 to 21 November). Once adopted, it is expected that the SOLAS amendments making the Polar Code mandatory would enter into force on 1 January 2017.