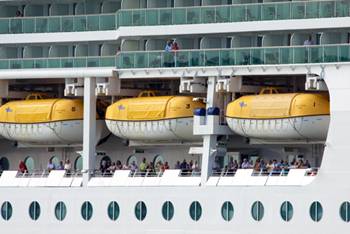 New requirements for musters of newly embarked passengers prior to or immediately upon departure come into force January 1, 2015. Further SOLAS amendments entering into force address enclosed-space entry and rescue drills and the code for recognized organizations.
The amended regulation III/19 in the International Convention for the Safety of Life at Sea was adopted in 2013 in the wake of the Costa Concordia incident, to ensure that passengers undergo safety drills, including mustering at the lifeboat stations, before the ship departs or immediately on departure.
Previously, the requirement was for the muster of passengers to take place within 24 hours of their embarkation.
An amendment to SOLAS regulation III/19, on emergency training and drills, makes mandatory the carrying out of enclosed-space entry and rescue drills, which will require crew members with enclosed-space entry or rescue responsibilities to participate in an enclosed-space entry and rescue drill at least once every two months.
The International Code of Safety for High-Speed Craft (HSC Code), the Code for the Construction and Equipment of Mobile Offshore Drilling Units (MODU Code) and the Code of Safety for Dynamically Supported Craft (DSC Code) have been similarly amended.
The aim of the amendments is to try and reduce the fatalities which might occur if crew enter enclosed spaces without adequate training or protection.
The Code for recognized organizations (RO Code) becomes mandatory, on January 1, 2015, under SOLAS, MARPOL and the Protocol of 1988 relating to the International Convention on Load Lines, 1966.
Administrations (flag States) may delegate certain responsibilities for surveying and certification of ships to recognized organizations (often the classification societies), which can act on behalf of the flag State. The RO Code provides flag States with standards mechanisms for the oversight, assessment and authorization of recognized organizations (ROs) and clarifies the responsibilities of such organizations.
Source: marinelink
[Total: 0]