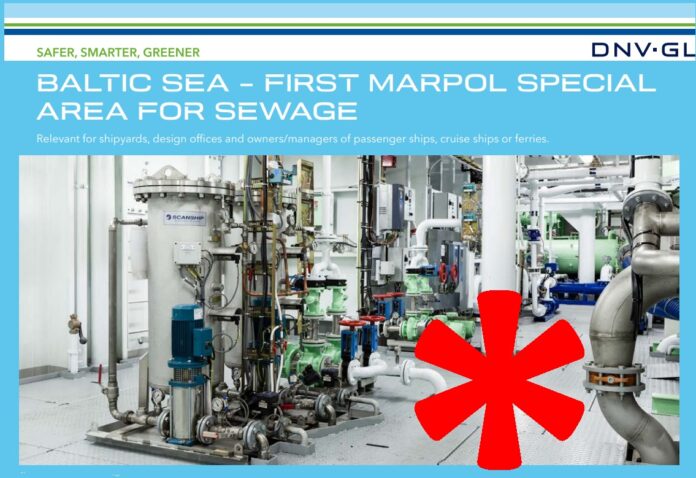 (www.MaritimeCyprus.com) Relevant for shipyards, design offices and owners/managers of passenger ships1, cruise ships or ferries. Considering the availability of reception facilities, the MEPC agreed at its 69th session on the dates for the Baltic Sea Special Area to take effect. This will impact sewage management for passenger ships when operating in the Baltic Sea.

The Baltic Sea special area will take effect as follows:

As of these dates, passenger ships may no longer discharge untreated sewage into the Baltic Sea. In order to discharge treated sewage, a treatment plant type approved and meeting the standard of Resolution MEPC.227(64)5 will be required. The alternative is a sewage holding tank with sufficient capacity. Any coastal state bordering a special area is committed to provide adequate facilities for the reception of sewage in ports used by passenger ships without causing undue delay to the ship.

In addition to setting the dates for when the Baltic Sea special area shall take effect, the MARPOL amendments which entered into force on 1 September 2017 defines a “new passenger ship” as a passenger ship contracted on or after 1 June 2019 or delivery of which is on or after 1 June 2021. Amendments have also been done to the ISPP Certificate form to include two options for the MEPC.227(64) type approval standard, with and without section 4.2 (nitrogen and phosphorus removal standard), as section 4.2 is only applicable to passenger ships.

A sewage treatment plant is only mandatory by MARPOL if discharging sewage within 12 nm from the nearest land and within a special aarea for passenger ships. Local discharge requirements may still apply even for grey water and treated sewage in some areas.

For a passenger ship, this means that prior to entering the Baltic Sea after the relevant effective date, the different alternatives for compliance should be carefully considered, including upgrading to a treatment plant according to MEPC.227(64). 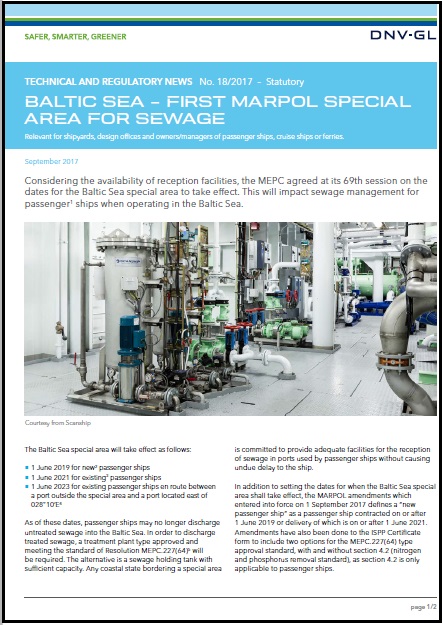