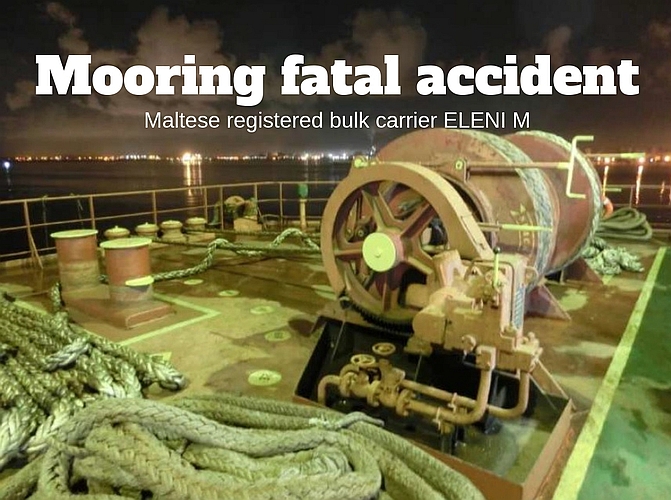 (www.MaritimeCyprus.com) In the evening of 18 November 2017, the Maltese registered bulk carrier Eleni M departed Porto Marghera in Italy, bound for Alexandria in Egypt with a cargo consisting of iron. After departure, the crew members on deck began to tidy up in preparation for sea passage. On the aft deck, the mooring lines that had been used while the ship was in port were being secured on the two mooring winches.

This happened within only a few seconds, while the assisting cadet had approached the AB who was operating the winch to convey the message to stop reeling in. The AB got crushed between the deck and the mooring rope and consequently he was severely injured. He was later pronounced dead by a medical doctor on board a Coast Guard vessel, which had come to assist and evacuate the casualty.

The safety investigation of the fatal accident revealed that in order to perform the task of stowing the mooring ropes on the winch drum, the crew members had to engage physically with the ropes while the winch was rotating, to stow it properly and make room for all of the rope. The close proximity to the rotating winch and physical interaction made it possible to get caught. Furthermore, communication among the crew members easily became ineffective due to the setup of the mooring arrangement and loud noises on the aft mooring deck.