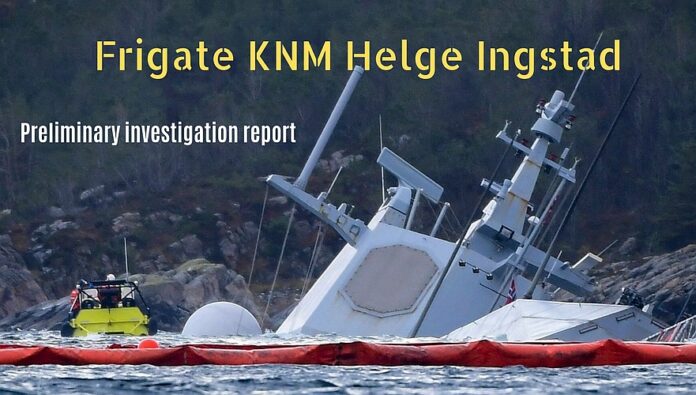 (www.MaritimeCyprus.com) The Accident Investigation Branch Norway (AIBN) issued the preliminary report of its investigation concerning the 8 November 2018 collision between the frigate KNM Helge Ingstad and the Maltese registered Aftramax tanker (Greek owned by Tsakos Columbia Management)  Sola TS in Hjeltefjorden. The accident was a complex one, involving several individuals, bridge crews, vessels, a VTS and the interaction between them. The investigation is therefore demanding in terms of time and resources. The Accident Investigation Board Norway (AIBN) stresses that this is a preliminary report and that it may consequently contain some errors and inaccuracies. Because of considerations relating to the duty of confidentiality, classified material and the investigation process, the AIBN does not publish all its information at the present time.

The AIBN's initial investigation has focused on establishing a preliminary description of the sequence of events, and on mapping what took place on board 'KNM Helge Ingstad' and 'Sola TS' up until the time of the accident at 04:01, including the vessels' communication with Fedje VTS. The purpose has been to find answers to the questions of what happened, how it happened, and what were the circumstances surrounding the accident.

After the watch change at around 03:40–03:45, this was the basis for the bridge crew's understanding of the situation. Even though 'Sola TS' left the quay at around that time, there continued to be little relative movement of the lights as the tanker turned from a southerly to a northerly course. The tanker's use of deck lights after departure also meant that the crew on 'KNM Helge Ingstad' were unable to spot the navigation lights on 'Sola TS'.

When 'KNM Helge Ingstad' at approximately 04:00 stated that they could not turn to starboard, it was based on a continued perception of the lights as being stationary and that a turn to starboard would send them straight into the lit object. They also believed that they were communicating with one of the three northbound vessels that they were monitoring on the radar. It was not until just after this that the crew on 'KNM Helge Ingstad' became aware that they were on collision course, at which time it was impossible to avoid a collision.

The AIBN's preliminary assessment is that the accident was not caused by any single act or event, but can be explained by a series of interacting complex factors and circumstances. The investigation team is seeking to identify and understand these factors. So far, the AIBN has not seen any indication of technical systems not working as intended up until the time of the collision.