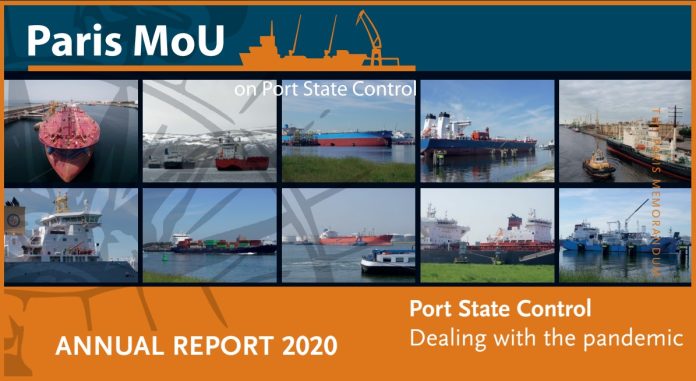 (www.MaritimeCyprus.com) The Paris MOU on Port State Control, has issued the 2020 Annual Report which also contains their White-grey-Black lists (for the relevant infographic check out further below).

This report provides an overview of the activities and statistics of the Paris MoU in 2020 which, due to the COVID-19 pandemic, was different from other years.

The impact of COVID-19 on the world has obviously affected the work of the Paris MoU. To deal with the restrictions as a result of COVID-19 and the consequences thereof, guidance was developed for the member Authorities of the Paris MoU on how best to deal with this situation. This Paris MoU guidance, that is partly based on and referring to guidance from both IMO and ILO, has been revised at various times to stay in line with the changed circumstances. The guidance has been shared with other port State control regimes, the IMO and the ILO as well as the public.

Nevertheless, the Paris MoU had to scale back efforts, resulting in decreasing numbers of
inspections, refusal of access orders, detentions and deficiencies.

In 2020, seven Refusal of Access Orders (bans) were issued. This shows a decrease compared to 2019 when 27 were issued. In the past three years 55 ships have been refused access for multiple detentions, five ships for "failing to call at an indicated repair yard" and two ships for jumping detention. In the same period, 12 ships were refused access for a second time (13 in the period 2017 to 2019). Over a three-year period the flags of Comoros, the Republic of Moldova, the United Republic of Tanzania and Togo have recorded the highest number of refusal of access orders.

Looking at the performance of flag States in this challenging year, as reflected on the Paris MoU “White, Grey and Black List”, a small shift is noticeable resulting in a larger “Grey List”. The total number of 39 flags on the “White List” is slightly less than that of 2019 (41).

Recognized Organizations (ROs) are authorised by flag States to carry out statutory surveys on their behalf. For this reason, it is important to monitor their performance, which
is why a performance list for ROs is presented in the Annual Report as well. Out of 369 detentions recorded in 2020, 37 (10%) were considered RO related (15% in 2019). Noteworthy is the fact that for 2020 no RO is mentioned in the category “very low” on the
RO performance list.

The number of deficiencies recorded on the seafarers’ employment agreement increased relatively from 1.2% to 1.9%. The highest increase of the most frequently recorded deficiencies.

The Paris MoU Annual Report also details the developments underway regarding the refinement and improvement of port State control in the region. The aim is to realise the mission of the Paris MoU to eliminate the operation of substandard shipping in the region. 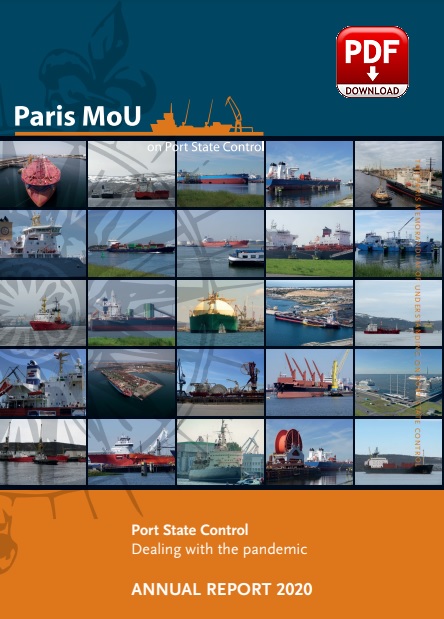