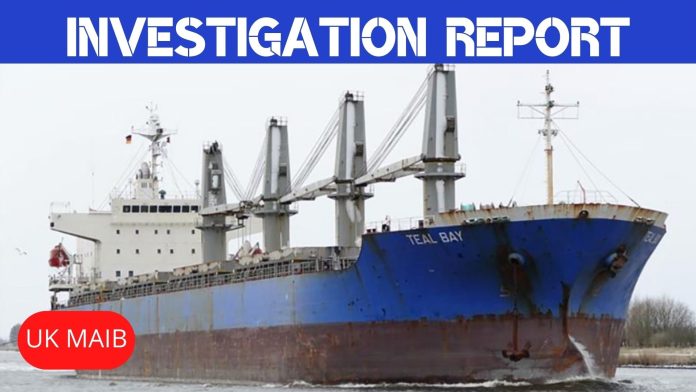 (www.MaritimeCyprus.com) On August 20, 2021, the chief officer of the M/V TEAL BAY was fatally struck by a mooring line when it sprang out of an open-roller fairlead.

At the time of the incident, the vessel was moored alongside an anchored bulk carrier and was being moved forward by tensioning the aft spring line to allow loading to be completed. During this operation, the vessel's mooring lines developed an upward lead due to the change in freeboard between the two vessels and, as the line was tensioned to move the TEAL BAY, its upward lead angle became too great for the open fairlead to contain it.

On 30 August 2021, Teal Bay’s chief officer was fatally injured when he was struck by a mooring line when it sprang out of an open roller fairlead. Teal Bay was moored alongside an anchored bulk carrier, and it was being moved forward by tensioning the aft spring to allow loading to be completed. During the loading operation, Teal Bay’s mooring lines had developed an upward lead due to the change in freeboard between the two vessels and, as the line was tensioned to move Teal Bay, its upward lead angle became too great for the open fairlead to contain it.

The investigation found that the use of an open fairlead was inappropriate during the transfer of cargo where a freeboard differential created the hazard of an upward lead on the mooring lines. The chief officer was struck because he was standing in a hazardous area close to a tensioned mooring line and the operation to move Teal Bay forward was attempted with insufficient crew and had not been risk assessed.

The UK MAIB conducted this investigation on behalf of the Isle of Man Ship Registry in accordance with the Memorandum of Understanding between the MAIB and the Red Ensign Group Category 1 registries of Isle of Man, Cayman Islands, Bermuda and Gibraltar. 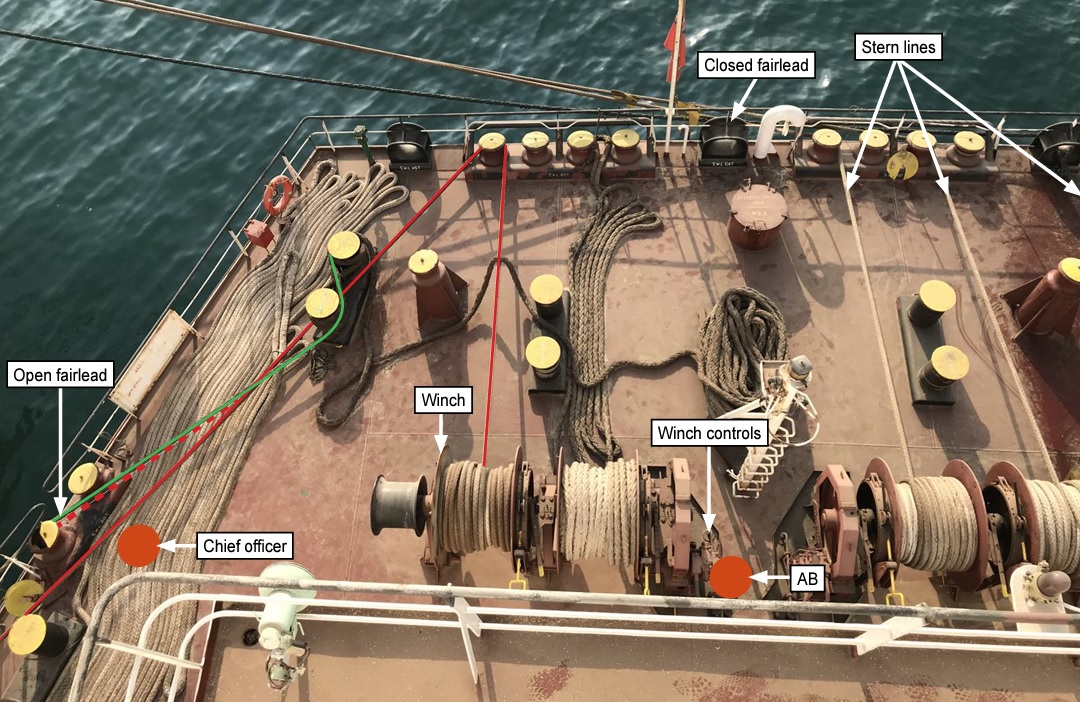 • Teal Bay’s C/O was struck on the head and fatally injured by a tensioned mooring line when it sprang out of a roller fairlead and snapped tight.

• The mooring line sprang free because the fairlead in use was open and the lines had developed a hazardous upward lead during STS cargo operations as the difference between the vessels’ freeboard increased.

• Leading two lines through the same fairlead restricted the space available and almost certainly contributed to the loss of spring line 1 containment.

• The number of crew assigned to carry out the warping operation was insufficient and almost certainly influenced the C/O’s decision, which went unchallenged, to stand in a hazardous area.

• There was insufficient planning for both the mooring and the warping; this happened because, for both evolutions, there was a lack of time available to plan and the crew was unfamiliar with STS bulk cargo operations.

• Despite the crew's efforts and the assistance of the tug Dobrynya, it took over 2 hours for the casualty to be seen by a medical professional. Given the severity of his injuries, it is unknown whether the delays in the C/O receiving medical attention had any bearing on his death; however, the lack of coordination by the parties involved in organizing the medical response created delays that lessened his chances of survival.

A recommendation (2022/128) has been made to the Isle of Man Ship Registry to promulgate the safety lessons in this report to vessels on the register.

For more details, you can download the full investigation report below: