(www.MaritimeCyprus.com) On March 13, 2022, at approximately 1812 Eastern Standard Time (EST), Hong-Kong flagged containership EVER FORWARD departed Seagirt Marine Terminal in Baltimore, Maryland en route to Norfolk, Virginia with a licensed Maryland State Pilot, hereinafter referred to as “Pilot 1,” in direction and control of the vessel. The vessel’s departure was slightly delayed due to a line handling issue at the facility.

During the outbound transit, Pilot 1 was solely relying on his Portable Pilot Unit (PPU) to navigate the EVER FORWARD. Just prior to the grounding, Pilot 1 exited the active navigation of his PPU to view a previous transit. Pilot 1 also made a series of five phone calls amounting to over 60 minutes of time during the course of his outbound transit. He also sent two text messages and began drafting an email immediately before the grounding occurred regarding issues he experienced with facility line handlers.

They issued two recommendations based on the finding of the Ever Forward case. First concerns vessel owners and marine operators developing and implementing effective policies outlining the use of cell phones and other portable electronic devices.

The second recommendation applies to the vessel’s operators. The investigators found that the third officer, a Chinese national, did not directly alert the pilot when he believed they were missing the turn. The recommendation is for owners and operators to ensure and promote crew awareness of policies regarding the duties and obligations of officers on watch for the safety of the ship, even when a pilot is embarked.

Finally, it was decided to conduct a costly operation of removing containers from the ship. More than 500 containers were removed in a week thanks to rescue experts who climbed onto container piles to unhook boxes and attach them to cranes on floating pontoons. As a result, the ship was easier to move. After 35 days of running aground, with the help of six tugs and two barges, the third refloating attempt was successful.

For more details, you can download the USCG investigation report below: 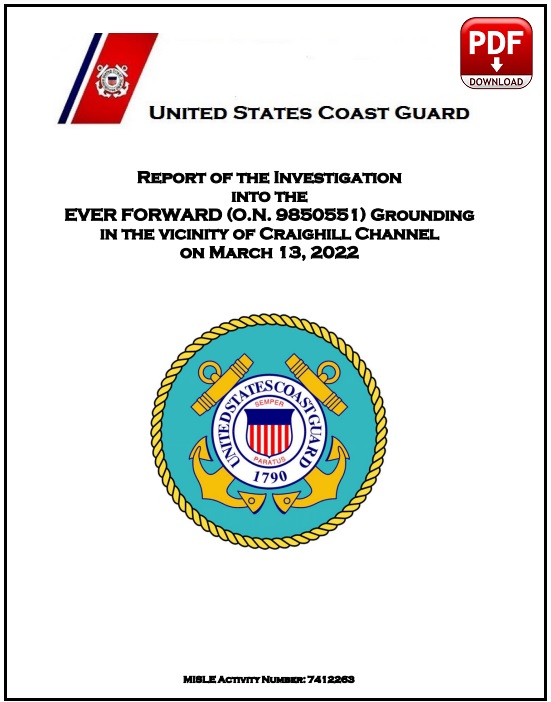