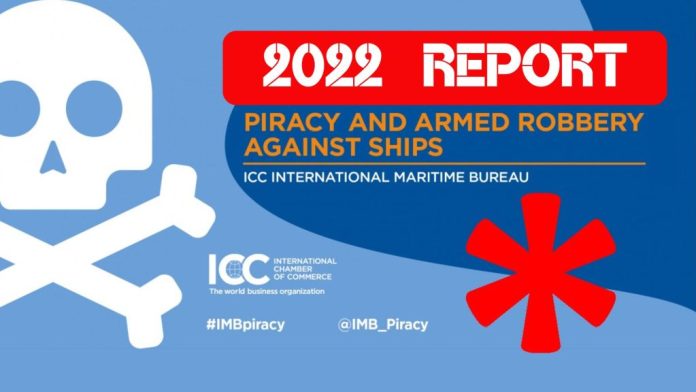 (www.MaritimeCyprus.com) The ICC IMB’s annual report recorded 115 incidents of piracy and armed robbery against ships in 2022 – compared to 132 in 2021 – with half of them occurring in Southeast Asian waters, particularly in the Singapore Straits, where incidents continue to rise.

Perpetrators were successful in gaining access to vessels in 95% of the reported incidents broken down as 107 vessels boarded, two vessels hijacked, five attempted attacks and one vessel fired upon. In many cases vessels were either anchored or steaming when boarded, with nearly all the incidents occurring during the hours of darkness.

Caution urged in the Gulf of Guinea

The continued and much needed reduction is attributed to an overall decrease of piratical activity in in the highly risky waters of the Gulf of Guinea – down from 35 incidents in 2021 to 19 in 2022. Sustained efforts are however needed to ensure the continued safety of seafarers in the Gulf of Guinea region, which remains dangerous as evidenced by two incidents in the last quarter of 2022.

In mid-November a Ro-Ro vessel was commandeered by pirates, around 28nm SW of Turtle Islands, Sierra Leone. All crew were taken hostage and the pirates tried to navigate the vessel through shallow waters resulting in the vessel running aground. The crew managed to free themselves and took refuge in the citadel until the Sierra Leone authorities boarded the vessel. In mid-December, a Suezmax tanker was also fired upon, 87nm NW of Bata, Equatorial Guinea. 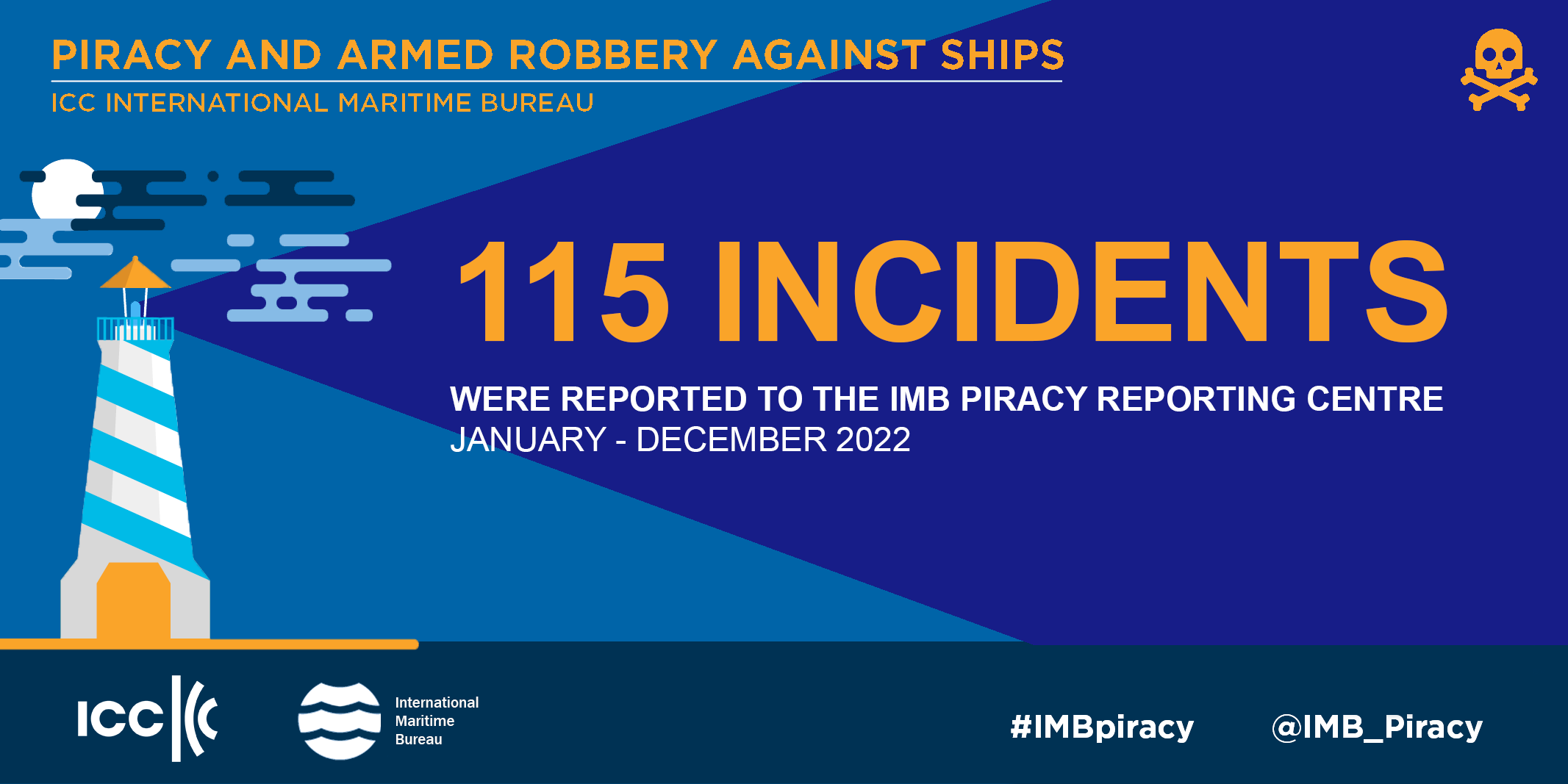 IMB Director Michael Howlett said: “The IMB applauds the prompt and decisive actions of the international navies and regional authorities in the Gulf of Guinea which have positively contributed to the drop in reported incidents and ensuring continued safety to crews and trade. Both these latter incidents do however cause concern and illustrate that efforts to enhance maritime security in the region must be sustained”. 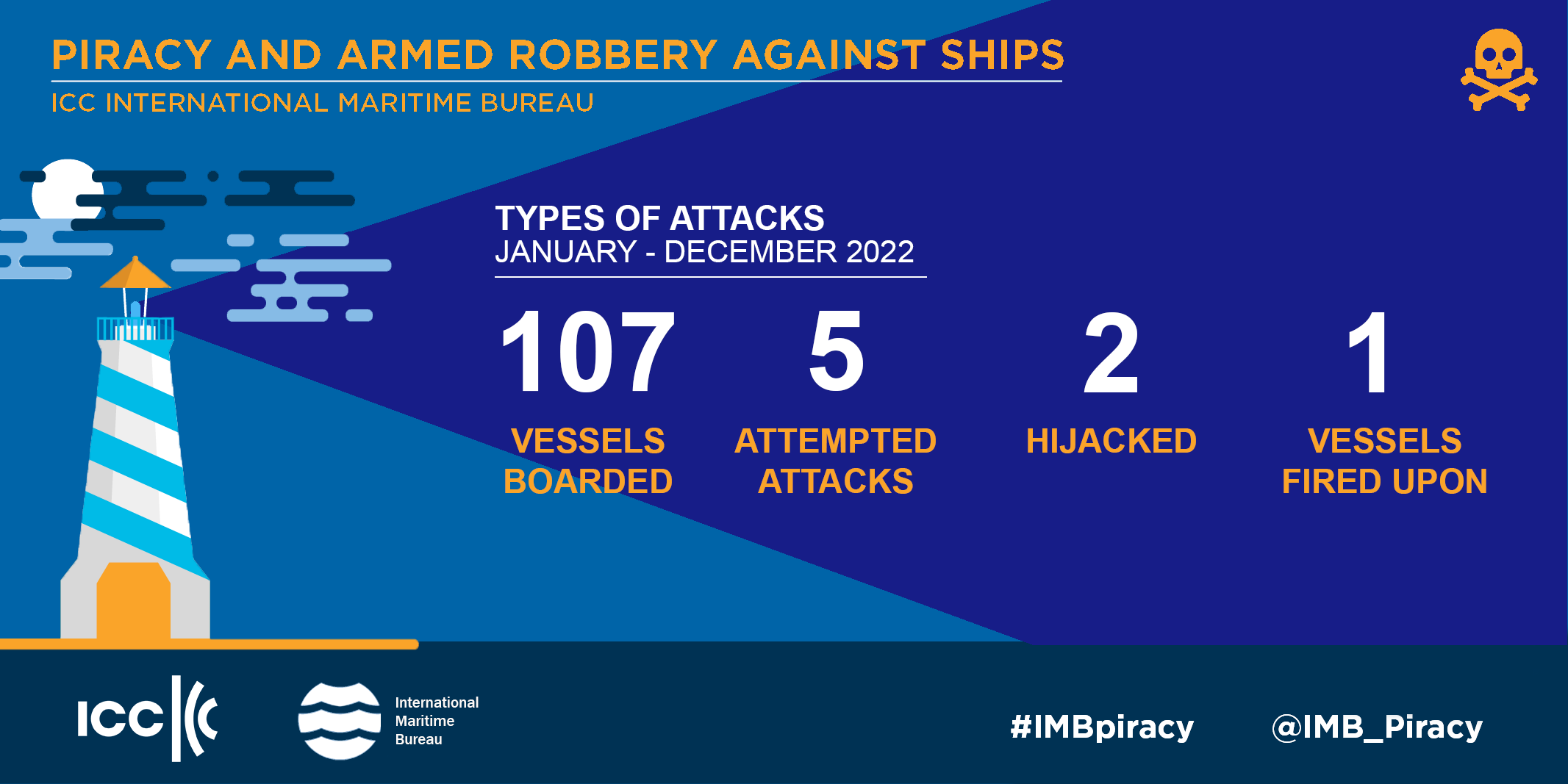 Incidents on the rise in the Singapore Straits

A third of all incidents reported globally in 2022 have been in the Singapore Straits with underway vessels successfully boarded in all 38 incidents. The majority of vessels boarded were over 50,000 DWT, including six laden vessels over 150,000 DWT. While these are considered low level opportunistic crimes and fall under the definition of armed robbery, crews continue to be at risk. In the 38 reported incidents, two crew were threatened and four were taken hostage for the duration of the incident. It has also been reported that in at least three incidents a gun was used to threaten the crew. 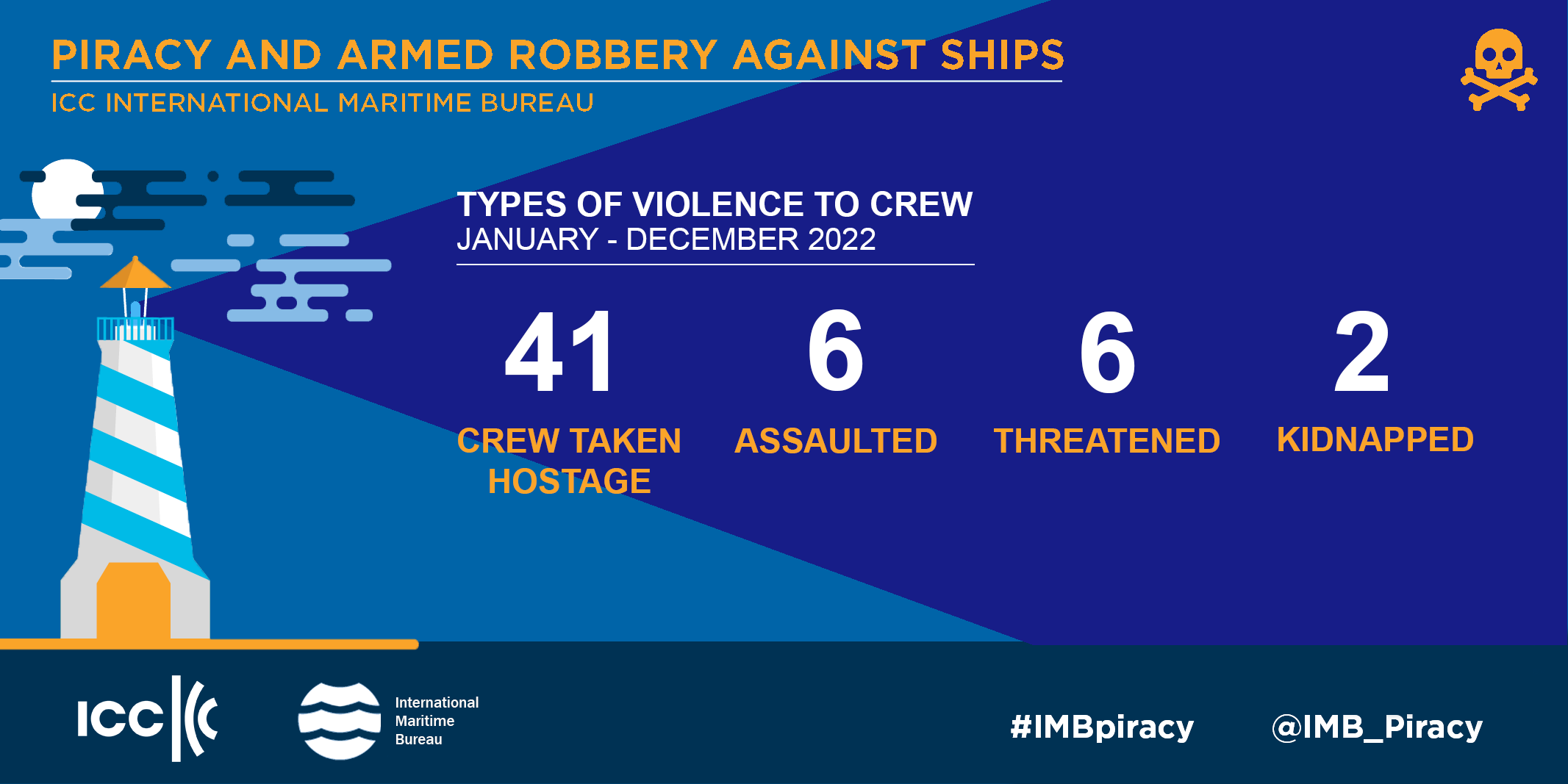 IMB Director Michael Howlett said: “We commend local authorities for investigating nearly all reported incidents. Being one of the most crucial and busy waterways for trade, these incidents continue to be a cause of concern as they not only have an impact on crew safety but also potential navigational and environmental consequences.” 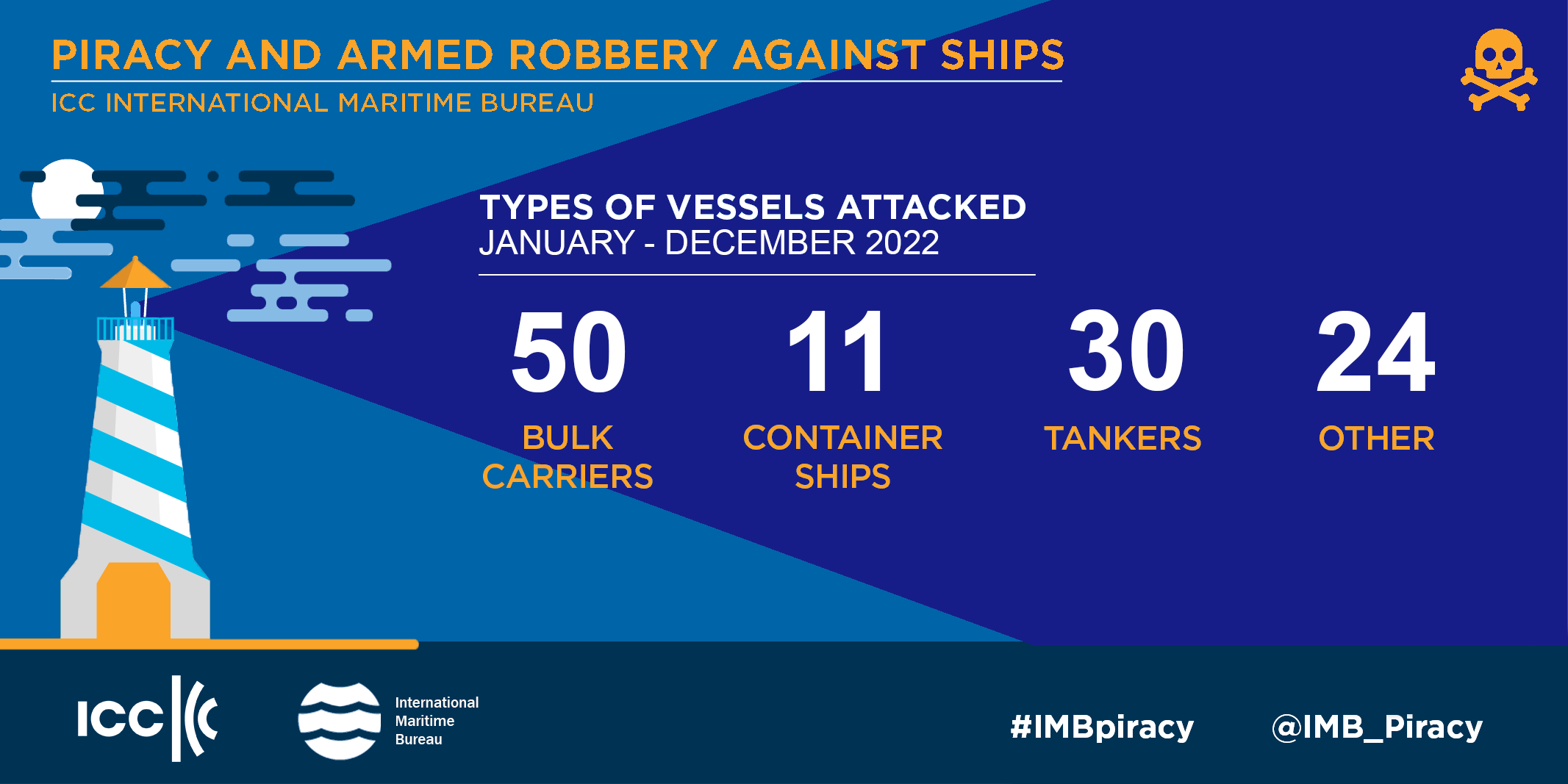 The IMB Piracy Reporting Centre also believes there is a degree of underreporting as well as late reporting of incidents from these waters and encourages Masters to report all incidents as early as possible so that local authorities are able to identify, investigate and apprehend the perpetrators. 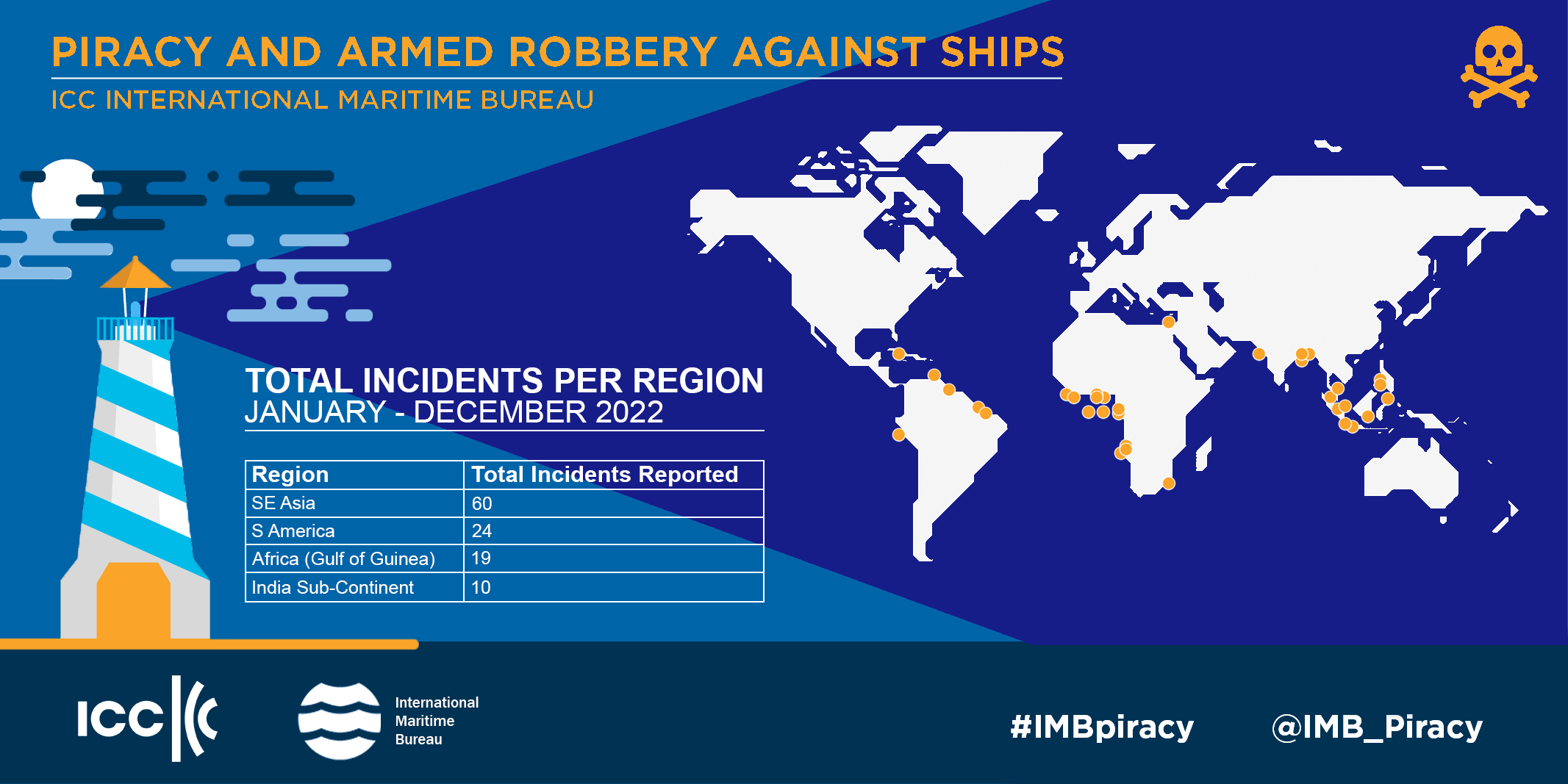 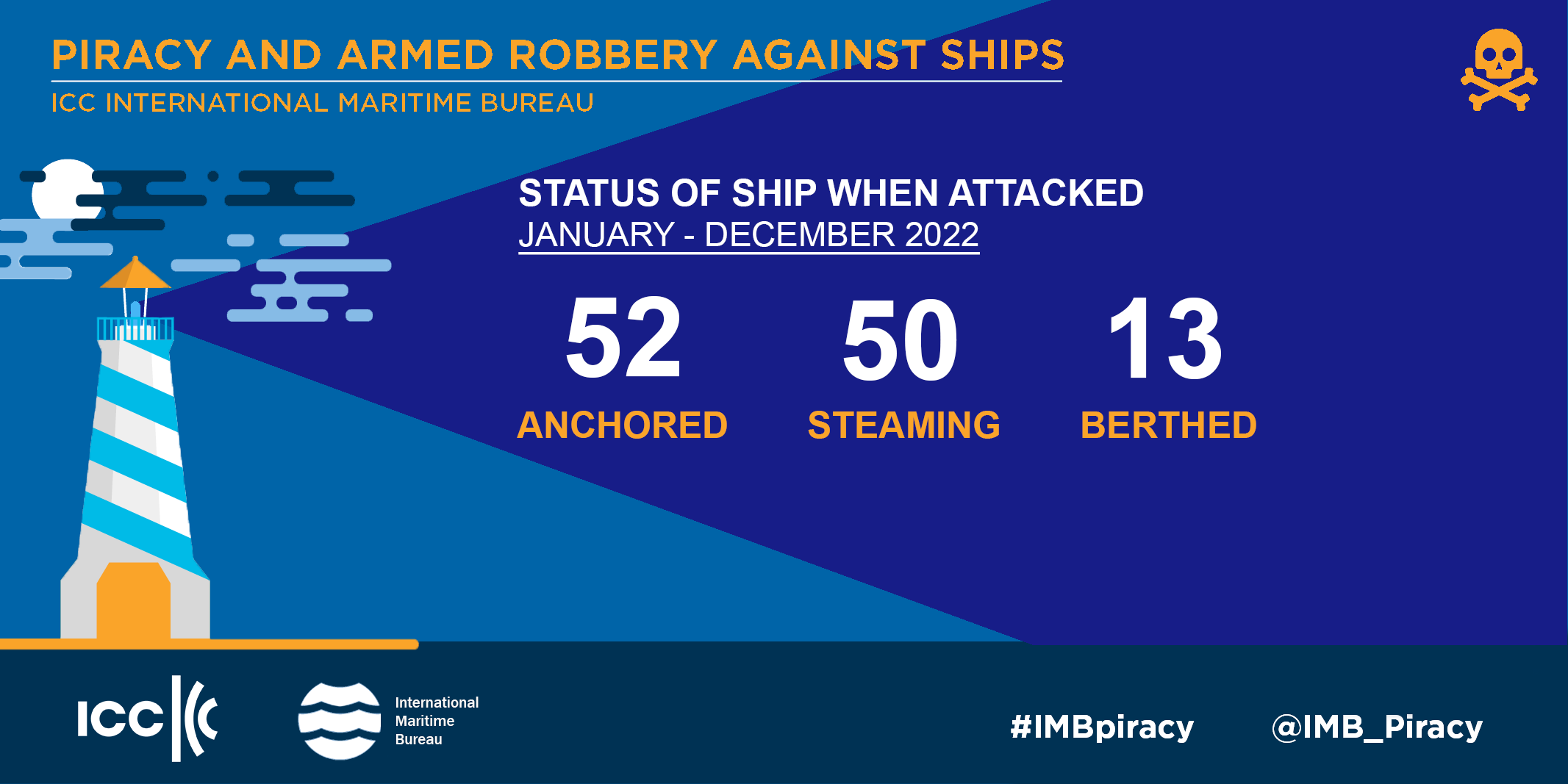 The full IMB piracy report for the year 2022 can be downloaded below: 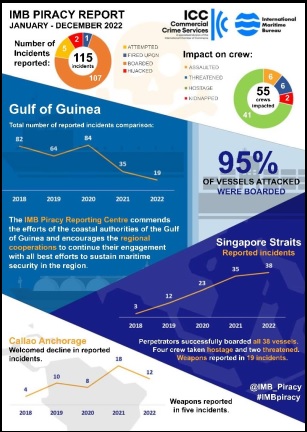