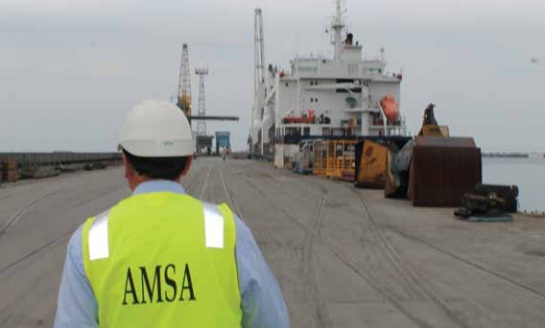 AMSA has published its Annual Report on Port State Control for 2014, a year which marked the introduction of a significant change in Australia's response to ships and operators who perform poorly on a consistent basis. In November and December 2014 AMSA used the directions power provided in section 246 of the Navigation Act 2012 to ban 2 ships from entering or using Australian ports for a period of 3 months.

In exercising this power it is important to note that AMSA only employs this mechanism where normal PSC intervention has not been effective in achieving a lasting change in behaviour. It is only used where a systemic failure has been identified. The essential intent of the process is to improve performance rather than simply remove problem vessels from Australian ports .

Shipping activity continued to grow fairly strongly in 2014, in spite of falling prices for the main commodities of iron ore and coal, which account for the major share of capacity in Australian trade. The following trends in shipping activity were identified:

• Consistent with the trends in recent years, 29.5 per cent of these ships made only a single port call in Australia in the year, and 2168 ships (38 per cent) which visited in 2014 did not visit an Australian port in 2013, continuing the trend of high rates of fleet turnover and replacement observed in recent years.

• These replacement ships were, at 8.3 years age on average, 2 years younger than the ships which did not return in 2014, which would normally indicate an overall improvement in fleet safety (as ship age is a major indicator of the probability of a ship being detained at PSC inspection). However this improvement has not been achieved, as for the first time in several years the average age of the visiting foreign-flagged fleet increased during 2014, which was subsequently reflected in a small decline in expected ship safety performance and regulatory compliance.

• The foreign fleet that called intoAustralian ports in 2014 represented larger ships overall. The average deadweight carrying capacity per port arrival in 2014 was 72,826 tonnes, an increase of 6.3 per cent over the previous year.

• In 2014 the risk profile of foreign-flagged ships and their port visits changed as a result of fleet turnover, such that a higher proportion of individual ships and a higher proportion of port visits by foreign ships were ranked in the top 2 risk groups of priority 1 and priority 2 for inspection focus. This meant that the improvements in ship risk profile experienced in 2013 were reversed in 2014.