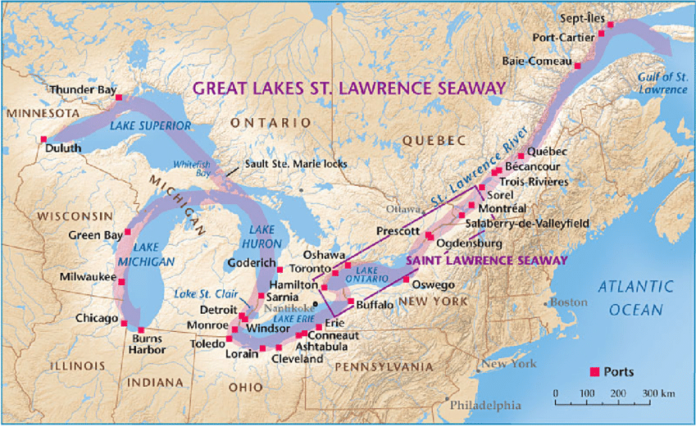 “For 60 years, the St. Lawrence Seaway has been a safe and reliable gateway for global commerce, further demonstrating our nation’s strong and strategic partnership with Canada,” said Secretary Elaine L. Chao.

At the event, Secretary Chao and Congresswoman Stefanik announced $6 million in funding for the Saint Lawrence Seaway Development Corporation to construct a new Visitors’ Center at the U.S. Eisenhower Lock. This new center will welcome the tens of thousands of people from around the world who come to watch ships transit the lock each year, and serve as a cornerstone for tourism in the North Country region of New York.

“I am so honored to host Secretary Elaine Chao for the 60th anniversary of the St. Lawrence Seaway. We have worked together to announce this significant investment in the North Country to promote tourism, economic development, and trade,” said Congresswoman Stefanik. “I thank Secretary Chao for her leadership and for her commitment to delivering results to our community.”

The bi-national waterway was officially opened in 1959 by Queen Elizabeth II and President Eisenhower. It has been proclaimed as one of the 10 most outstanding engineering achievements of the past 100 years. Since its inception, nearly 3 billion tons of cargo, valued at over $450 billion, have been transported via the Seaway. Maritime commerce on the Great Lakes St. Lawrence Seaway System supports more than 237,000 U.S. and Canadian jobs and generates $35 billion in economic activity annually. Thanks to this Administration’s pro-growth economic policies, total tonnage on the St. Lawrence Seaway surpassed 5, 10, and 15-year averages, making the 2018 shipping season the best in over a decade.

The St. Lawrence Seaway stands to see continued growth, pending the passage of an overhaul of the 25-year-old North American Free Trade agreement. The United States-Mexico-Canada Agreement (USMCA) is a comprehensive, 21st century agreement with two of the United States’ most critical trade partners. The agreement not only keeps most tariffs between the three countries at zero, it does more than any prior agreement to eliminate non-tariff barriers and unfair subsidies that work against America’s farmers, workers and employers.

“As the Seaway marks 60 years of operations, it is important to remember its history, but also to take this opportunity to highlight the investments and innovations in the Seaway System under the leadership of Secretary Chao that keep the waterway well positioned for the future,” said U.S. Seaway Deputy Administrator Craig H. Middlebrook.