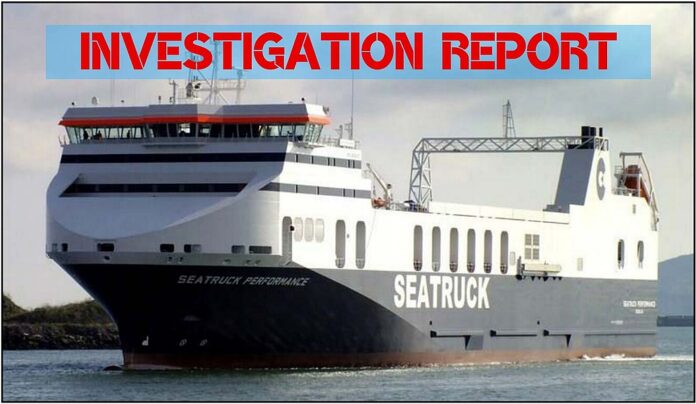 The ferry remained underway but quickly developed a 7° list to port. Seatruck Performance was maneuvered into safe water while the crew checked for damage and the chief officer brought the ferry upright by transferring ballast.

The ferry was able to return to Warrenpoint without assistance and there were no injuries to its 11 passengers and 22 crew, or any pollution. Subsequent survey and dry dock identified that a tank and a void space on the ferry’s port side had been breached.

Seatruck Performance was turning into a narrow, buoyed channel when it grounded. The MAIB investigation identified that the ferry’s outbound passage had not been sufficiently planned and, specifically, the effects of squat had not been adequately considered; the electronic navigation system was not being used effectively; and the newly appointed master, who was mainly navigating by eye, was not being effectively supported by the other officers on the bridge.

Seatruck Performance’s owner and manager, Seatruck Ferries Ltd, has taken action to raise awareness of shallow water effects and improve onboard passage planning. The company has been recommended
to take further measures to ensure the safe navigation of its vessels by optimizing its use of electronic navigation systems and enhancing its Bridge Resource Management training.

The ferry was out of service for 3 weeks.