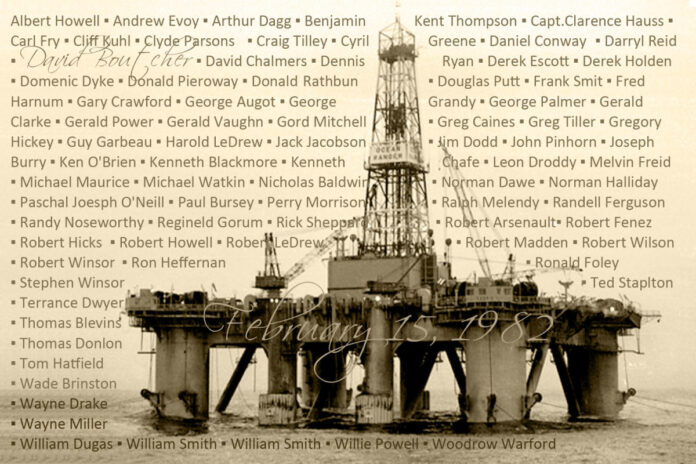 (www.MaritimeCyprus.com) During the winter of 1982, the world’s largest mobile offshore drilling unit, the Ocean Ranger, was drilling for oil off the Newfoundland coast. An intense storm approached. Since its 1976 launch, the big rig had weathered over 50 storms in two oceans; designed for 115 mph winds and 110-foot waves, it could handle this storm too.

But close to 1:00 a.m. EST on February 15, 1982, the Ocean Ranger’s crew sent a desperate mayday call. Nearby vessels arrived only an hour later to find rescue impossible on the freezing, tall waves. Of the Ocean Ranger’s 84 crewmembers, only 22 were ever recovered. Autopsies confirmed that these victims died from hypothermia, and the 62 missing were presumed to have met a similar fate.

All 84 crew members died, despite concerted attempts by the crews of several standby boats to rescue men from the water. The bodies of 22 of the 84 crew were found in the days after the tragedy and tests concluded that all had died as a result of drowning while in a hypothermic state. No exposure suits were worn and the temperature of the seawater at the time was 29 degrees F (-2 deg Celsius). The remains of the rig itself were found by sonar search over the following weeks, resting in an inverted position approximately 485 feet south-east of the wellhead, surrounded by major items of debris such as the derrick. The rig had capsized bow-first, turning over and striking the seafloor with the forward ends of the rig's pontoons.