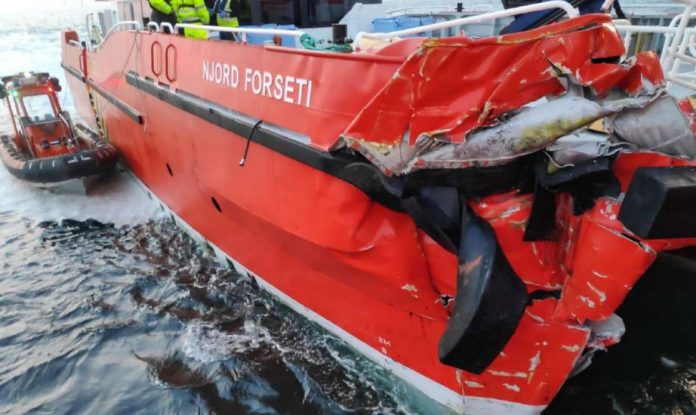 (www.MaritimeCyprus.com) The Jersey Maritime Administration has published a report into its investigation of the causes of an allision between a windfarm support vessel and a windfarm tower in the Southern North Sea on 23 April 2020.

Shortly after 1800 local time, the vessel was released from duties on a windfarm and at 1811 departed for the return passage to port. Aboard the vessel were three crew members, and one windfarm technician who was being transferred ashore. Sea conditions were calm with light winds and low swell. The weather was fair with good visibility.

Whilst transiting between windfarms at approximately 20 knots, Njord Forseti hit a turbine tower. The impact resulted in serious damage to the vessel. Two crew members were evacuated by air to the hospital, and the third was required to have a subsequent medical examination. Immediate assistance was provided by a nearby offshore construction vessel. The Njord Forseti returned to port under her own power with temporary crew members provided by a sister vessel.

The Jersey Maritime Administration report made the following recommendations:

And because nothing speaks clearer than an image or a video, pls watch the relevant CCTV video below: